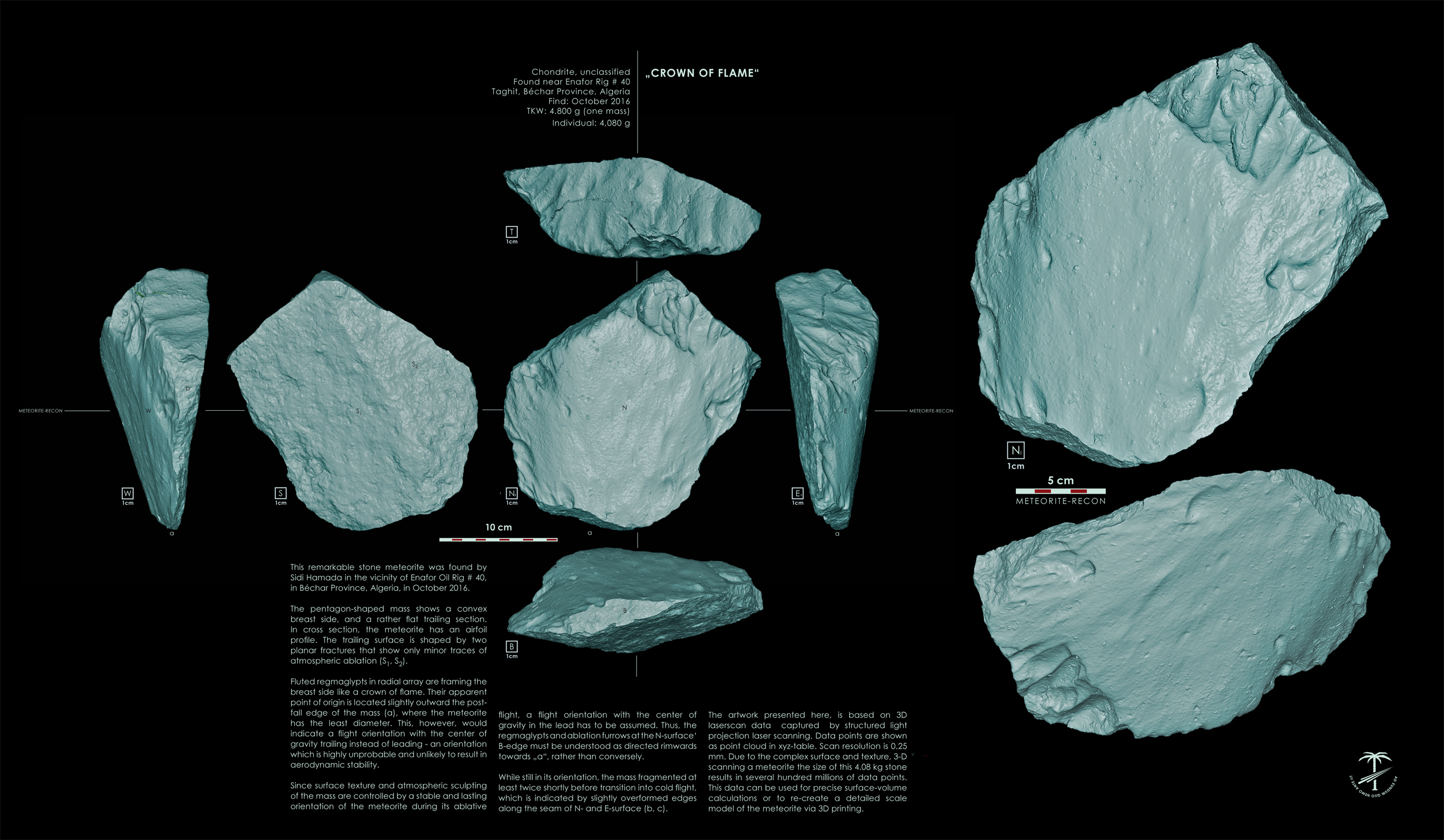 This remarkable stone meteorite was found by Sidi Hamada in the vicinity of Enafor Oil Rig # 40, in Béchar Province, Algeria, in October 2016.

The pentagon-shaped mass shows a convex breast side, and a rather flat trailing section. In cross section, the meteorite has an airfoil profile. The trailing surface is shaped by two planar fractures that show only minor traces of atmospheric ablation (S1, S2).

Fluted regmaglypts in radial array are framing the breast side like a crown of flame. Their apparent point of origin is located slightly outward the post-fall edge of the mass (a), where the meteorite has the least diameter. This, however, would indicate a flight orientation with the center of gravity trailing instead of leading – an orientation which is highly unprobable and unlikely to result in aerodynamic stability.

Since surface texture and atmospheric sculpting of the mass are controlled by a stable and lasting orientation of the meteorite during its ablative flight, a flight orientation with the center of gravity in the lead has to be assumed. Thus, the regmaglypts and ablation furrows at the N-surface’ B-edge must be understood as directed rimwards towards “a”, rather than conversely.

While still in its orientation, the mass fragmented at least twice shortly before transition into cold flight, which is indicated by slightly overformed edges along the seam of N- and E-surface (b, c). 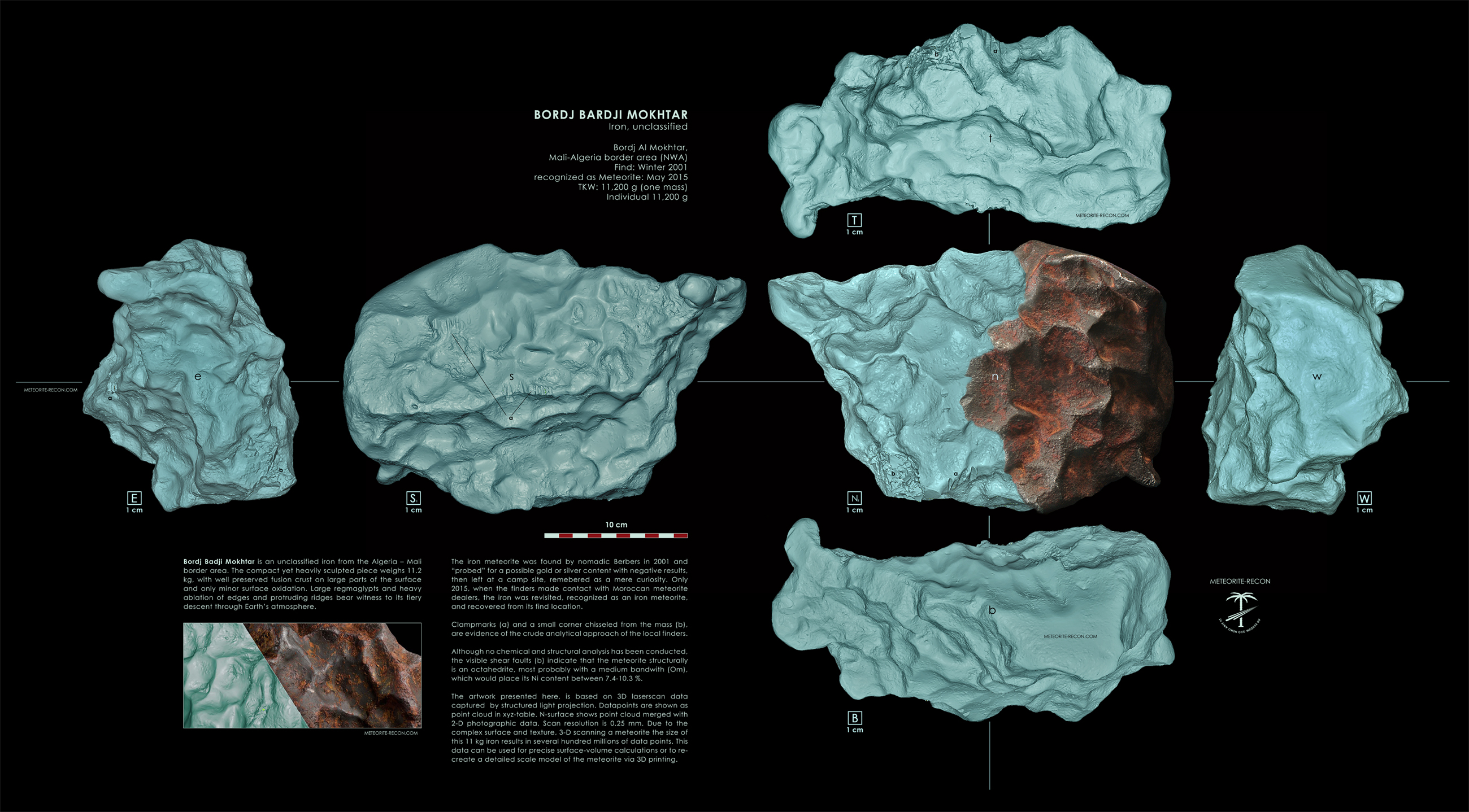 Bordj Badji Mokhtar is an unclassified iron from the Algeria – Mali border area. The compact yet heavily sculpted piece weighs 11.2 kg, with well preserved fusion crust on large parts of the surface and only minor surface oxidation. Large regmaglypts and heavy ablation of edges and protruding ridges bear witness to its fiery descent through Earth’s atmosphere.

The irregular shape of the iron and the disntinct regmaglypts indicate a chaotic spin of the meteoroid during its ablative flight. Since the resulting surface shows no traces of the initial fracture planes that separated the meteoroid from its larger mother body, we can assume that the mass separated early in flight and continued the atmospheric passage as an individual without further fragmentation.

The excellent degree of preservation of the meteorite, particularly on the S-surface, allows to observe the thin, magnetite-rich layers of fusion crust and solidified flow lines. Due to the matte olive-drab patina that has developed on the outer magnetite layer, we can assume that the S-surface represents the surface exposed in situ, while the N-surface appears to have been the contacting surface.

The iron meteorite was found by nomadic Berbers in 2001 and “probed” for a possible gold or silver content with negative results, then left at a camp site, remebered as a mere curiosity. Only 2015, when the finders made contact with Moroccan meteorite dealers, the iron was revisited, recognized as an iron meteorite, and recovered from its find location. Clampmarks (a) and a small corner chisseled from the mass (b), are evidence of the crude analytical approach of the local finders.

Although no chemical and structural analysis has been conducted, the visible shear faults (b) indicate that the meteorite structurally is an octahedrite, most probably with a medium bandwith (Om), which would place its Ni content between 7.4-10.3 %.

The artwork presented here, is based on 3D laserscan data captured by structured light projection. Datapoints are shown as polygon mesh (see detail below) and point clouds in xyz-table. N-surface shows point cloud merged with 2-D photographic data. Scan resolution is 0.25 mm. Due to the complex surface and texture, 3-D scanning a meteorite the size of this 11 kg iron results in several hundred millions of data points. This data can be used for precise surface-volume calculations or to re-create a detailed scale model of the meteorite via 3D printing. 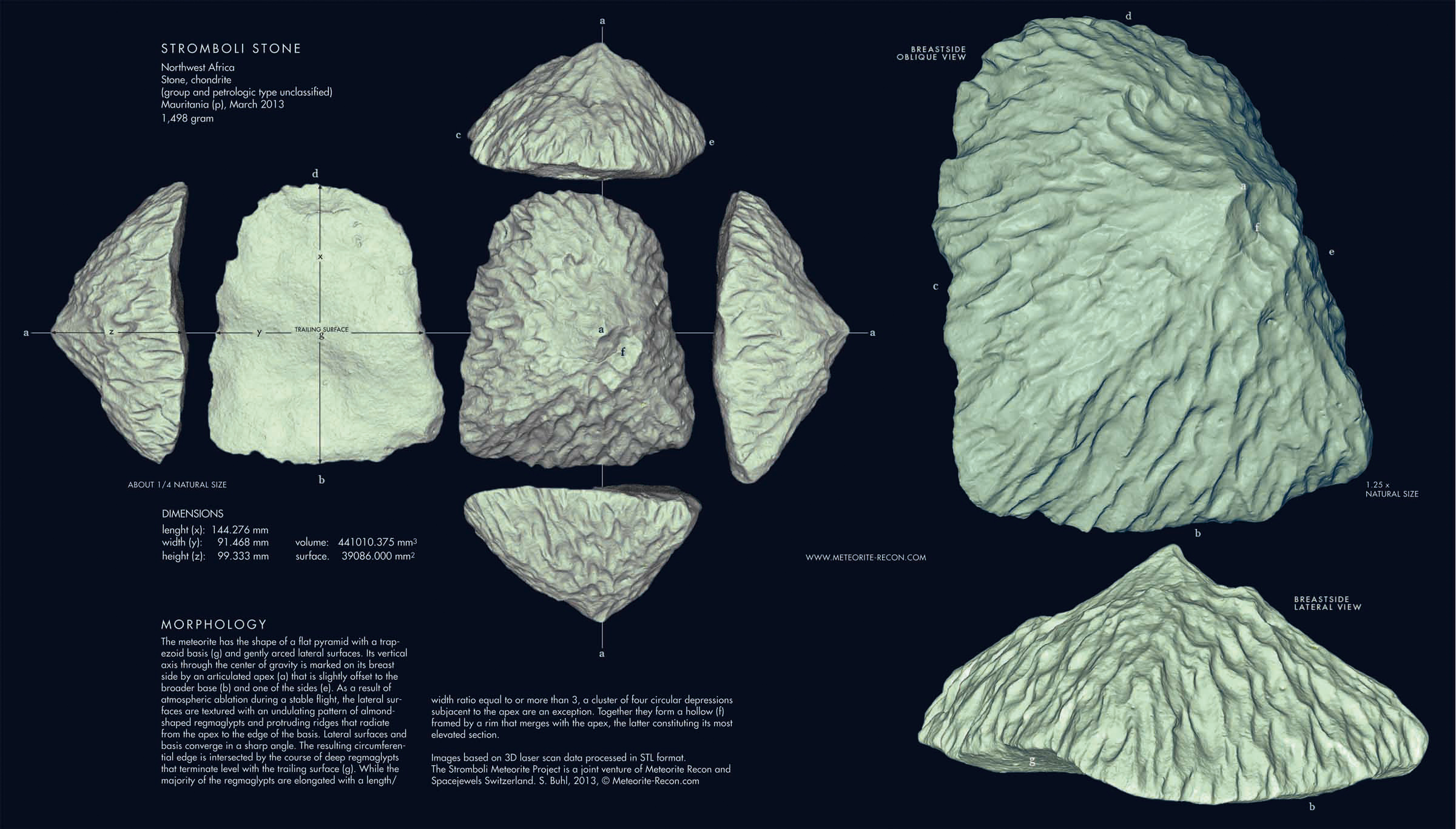 3D morphology of the Stromboli Stone. Click to supersize

This meteorite was reportedly found by Berber nomads in the northwestern Sahara in Spring 2013, and was subsequently sold by a Mauritanian meteorite dealer to a Moroccan businessman. The precise find location is unknown and no in situ photos exist. The specimen weighs 1,495 g, its maximum dimensions are 14.4 x 9.1 x 9.9 cm. Its shape is that of a flat pyramid with a trapezoid basis and gently arced lateral surfaces. The meteorite’s vertical axis through its center of gravity is marked on its leading surface by an articulated apex that is slightly offset to the broader base.

As a result of atmospheric ablation during a stable flight, the lateral surfaces are textured with an undulating pattern of almond-shaped regmaglypts and protruding ridges that radiate from the apex to the edge of the basis where lateral and the trailing base surfaces converge in a sharp angle. The resulting circumferential edge is intersected by the course of deep regmaglypts, the latter shaping an outline that resembles the folds of a silk robe.

While the majority of the regmaglypts are elongated with a length/width ratio equal to or more than 3, a cluster of four circular depressions subjacent to the apex are an exception. Together they form a hollow that resembles a volcanic caldera. As a matter of fact the meteorite’s entire topography bears a striking similarity with the volcanic island of Stromboli off the Sicilian coast in the Mediterranean – which lead to the field name “Stromboli Stone”.

The effects of atmospheric ablation are uniquely preserved in the specimen’s shape and texture, but the effects of terrestrial weathering are equally obvious: During the meteorite’s terrestrial residence the fusion crust has been replaced by a semi-opaque glaze of desert varnish, and only patches of the initial substrate that forms the underlying, semi-oxidized layer of the meteorite’s fusion rind, remain. Yet despite its extended ordeal on our planet’s surface, the meteorite has stayed entirely intact without even the slightest damage to its integrity.

While very likely an ordinary chondrite, the meteorite’s unique shape excluded any destructive measures and so we refrained from removing a section for analysis and classification. In order to preserve the meteorite’s shape and texture, in case its future owner decides otherwise, a 3-D scan was performed and stereolitographical data was saved in STL-format. The virtual replica stored in STL-format allows in depth study of the morphology of the Stromboli Stone and enables further research, e.g. wind tunnel simulations and precise determination of the meteorite’s drag/shape factor.