The Find of a Landmark Meteorite

This episode is based on personal notes taken during a Meteorite Recon expedition into one of the less explored deserts of the northern hemisphere.

It covers three days in May 2009 and includes the discovery of the 20 kg El Alamat chondrite.

We arrived at the new camp site in the middle of the night. After the dust stirred up by our heavy vehicles had settled the waxing moon illuminated a pale white depression surrounded by a circle of shallow limestone cliffs. The bright gravel reflected the moonlight with such intensity, one could have taken it for snow, had it not still been 85°F. Jagged rocks enclosed the place like some ancient fortress wall half tumbled and sunken into the sands. The site offered proper protection against the howling winds and in its centre a broad sandy furrow provided soft underground to pitch our tents. It was the ideal spot.

The strenuous three hour night drive through challenging axle braking terrain had taken us to our limits. After the camp was set up everybody soon went to sleep. In the tent next to me I could hear my team mate Thomas cursing the incompetent outdoor shop’s employee who sold him his kit mat. To Thomas’ greatest disapproval the device had a broken valve and could not be stopped from deflating. In my doze I overheard him picturing thousand and one unpleasantness he planned to do to the unlucky guy once back home. Several among were quite creative. Frequently I thought he had finished but he was just drawing breath to continue with ever wilder threats to his virtual scapegoat. I took a mental note never to sell Thomas malfunctioning camping equipment and dozed off.

In the morning the wind had died. I got up with the rising sun, woken by excited voices and a strange snarling sound, originating in the corner of the camp occupied by our two Russian team mates. When I dozily peered out of my tent I saw them busy extinguishing a huge flash flame originating from their kerosene stove. Due to pertinent experience on occasion of a previous expedition, the tricky device had already earned the name “Tunguska stove”. Chernobyl-stove might have been an appropriate designation too, I thought.

After they regained control over the hazardous instrument Ivan began to brew us a coffee. The two Russians were lounging lazily in the early morning sun in their camping chairs, their cooker lurking between them. I joined the two for a cup, but much to their amusement I kept a considerable clearing distance to their cooking pit.

We still hoarded plenty of supplies so I went through our storing boxes to compile an opulent desert breakfast when Thomas walked over, pointing to the imprints the gravel under his tent had left in his aching back. “The most comfortable inflating mat for rocky desert surfaces on the market” he grudgingly quoted the seller. “What can not be cured must be endured” I observed, obviously not an adequate comment to cheer him up.

To plan a joint course for today’s search we unfolded our maps and started to arrange a number of meeting points along the way. Thomas and Pjotr were hacking coordinates into their GPS devices, when a sudden buzzing sound distracted me from plotting our traverse on the map. 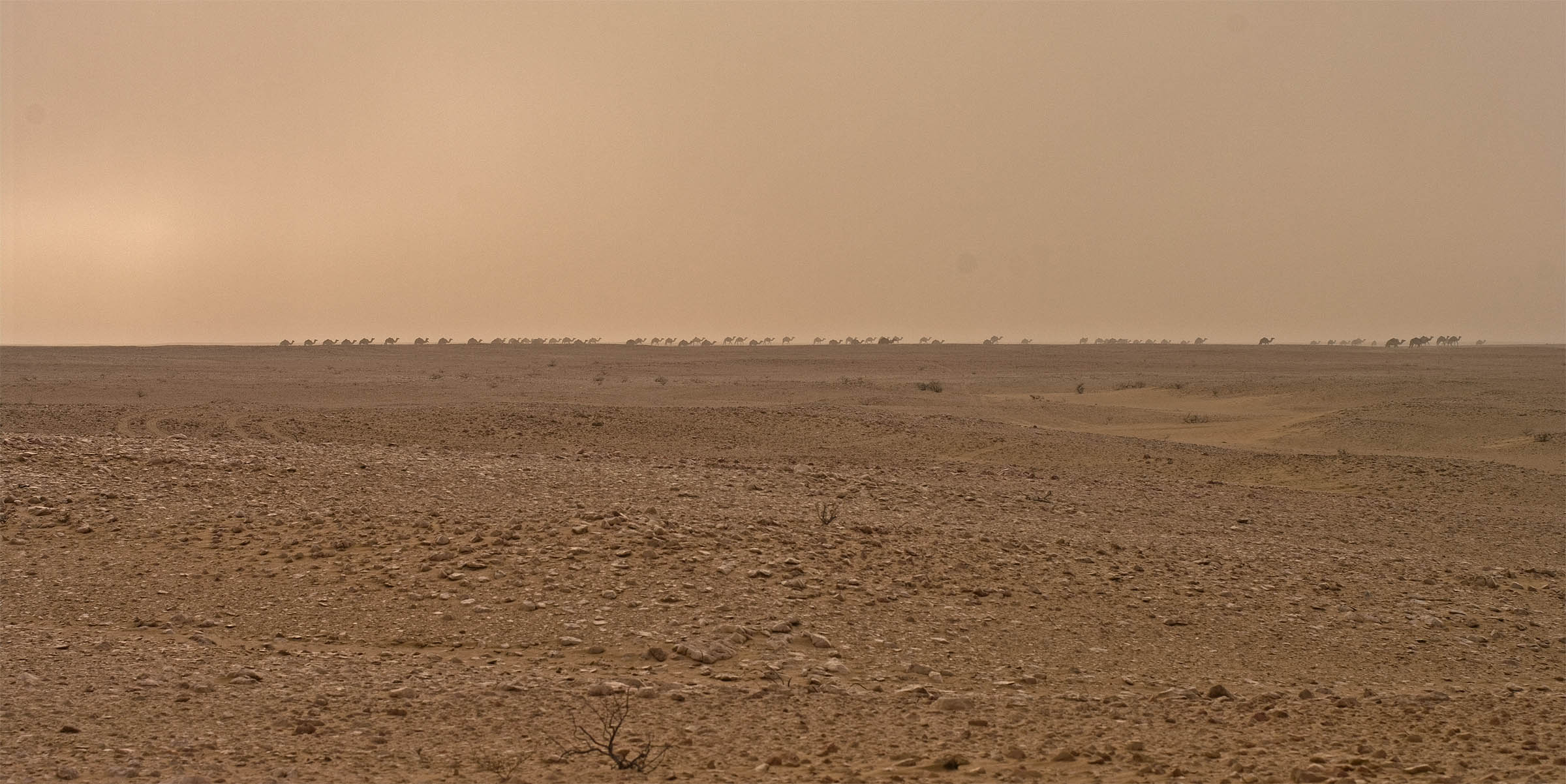 Caravan at the horizon

Like a mechanical drone a black iridescent insect appeared from the desert, enormous in size and slowly encircling us midair with a low-frequent humming buzz. It was not until the metallic thing had landed and approached us on his legs that I recognized the dung beetle. A coleoptera of the scarabaeidae family, the lesser known scarabaeus cristatus, paid us a visit. I had once seen a female specimen near Luxor but was surprised to find that the species which prefers semi-arid habitats was advancing this far into the inner desert.

Scarabaeus cristatus feeds exclusively on dung. Once freshly laid dung is located the animals use their legs and mouth parts with geometric artistry to fashion parts of it into huge circular or pear-shaped structures and then roll them into an underground nest that has been prepared by both the male and the female. The dung beetle is known for his imperturbable determination: once the dung ball is shaped nothing will stop the insect from rolling it to its destination, following a straight line, despite all obstacles. The tough frugal animal had my greatest admiration.

Guided by their sensitive sense of smell the flying insects keep zigzagging their territory until they pick up and follow the odour of fresh animal waste. As there were no other mammals around, I wondered if the scarab had picked up the scent of our outfit. Perhaps I should give some thought to the idea of stricter rules for personal hygiene, I wondered.

Meanwhile the splendiferous critter was scurrying between our legs following whatever business had brought him here. Under the rays of the early morning sun its head, thorax and chiselled abdomen were shining in temper colour like polished metal. The hammered finish of the torso, the spiked and spade shaped forelegs, which identified the animal as a skilled excavator, evoked the impression of a metallic artefact rather than that of an insect. The dung beetle’s delicate mandibles were restlessly moving, as if talking to us in an inaudible language. We were granted a scarce glimpse at one of mother nature’s precious jewels.

T. Fuellengraben with meteorite find. The 450 g shield-shaped chondrite is half embedded in the sediment

It is no wonder that the scarab is deeply woven into the mythology of Pharaonic Egypt. Under the name “Khepera”, which means “he was came forth”, the insect was worshipped from the Sixth Dynasty up to the period of Roman rule. A dung beetle called ‘Aksak’ was supposed to have made the first woman and man on earth from clay. The astronomical ceiling in the tomb of Ramses VI pictures the nightly “death” and “rebirth” of the sun as being swallowed by Nut, goddess of the sky, and re-emerging from her womb as a scarab.

The image of the Khepri, conveying ideas of transformation and resurrection, is omnipresent in ancient Egyptian religious and funerary art. Perhaps the most spectacular example of these manifestations is the yellow-green pectoral scarab found by Howard Carter among the entombed provisions of Tutankhamen in the Valley of the Kings. It was expertly carved from a large specimen of Libyan desert glass.

When we had finished breakfast our scarab obviously decided that despite the tempting smell in our camp there was nothing to gain here for him. It swung forward its elytra, the hard covers under which it folds its wings, spread them out in a flash of amber light, and got airborne in a puff of dust. We watched the black knight disappear in the desert, secretly wishing his bearing might lead us to a monumental thunderstone, awaiting its discovery in the sands which lay before us.

Although still early in the morning it already started to get unpleasing hot. We hurried getting our gear packed in order to catch some shade and air flow in the car. Thomas powered up the engine of the brand new Toyota Land Cruiser while I plugged in our navigation equipment and ran through our morning check list. Somehow our Russian friends were still busy laboriously arranging their equipment and it looked as if they would need another best part of an hour until they would be ready to depart. About a mile from the camp and still within eyeshot there was a tempting flat plain and our team mates had no objections giving us a little head start. So off we went.

With five major finds, among them a beautiful and fresh looking regmaglypted 1.2 kg chondrite, our team mates had experienced a tremendous run of good luck the previous day. Despite eight hours of tireless searching Thomas and I had only managed to find one small weathered fragment at the same time. No need to say that our underperformance had brought us the one or other pinprick from our mates, and we were eager to put things back into perspective.

Despite all comradeship and shared hardships welding our team together there still was a sporting rivalry when it came to meteorite prospection. Pjotr’s and my search strategies as well as our technical approach differed and we both were keen to prove our concepts to the other. The most convincing argument in this regard of course would be practical success.

Pjotr was by far the more experienced prospector. He had taken part in at least fifty field campaigns, the majority of them in Russia. In most of them he was in charge for his former Russian employer, one of the leading international institutes in meteorite research. He had to quit his job as a field researcher and become a private meteorite prospector because the institutional salary was insufficient to feed his growing family.

He and I had already worked together on joint expeditions at the fall site of the Pultusk meteorite shower in Poland and at the Kainsaz strewn field in Tartarstan. When it came to meteorite searching on his home turf, the vast Siberian tundra and taiga, there was no one fit to hold a candle to him. But here in the great sands we operated on different terrain and I was convinced that my own desert record would eventually pay off.

Both of us were accompanied by capable assistants. With Pjotr’s mate, Ivan Andreiev, I was already familiar from our expedition to Kainsaz. Enthusiastic and indefatigable as he was, he proved to be the ideal companion for the strenuous field trip we were undertaking. It was Ivan’s first stay in a desert and with his habitually camera, Hawaii shirt and bucket hat (“I am on vacation!”), in the beginning of the trip he looked slightly out of place. However after the scorching sun had burned his nose he soon switched to local custom and wore the tagelmust I had brought for him. The latter is a bleached or dyed cotton garment eight meters in length, with the appearance of both a veil and a turban. Over the years I found it the most practical garment for the region, as it covers not only the head but also prevents from the inhalation of wind borne dust and sand.

123456
We use cookies to ensure that we give you the best experience on our website. If you continue to use this site we will assume that you are happy with it.Ok