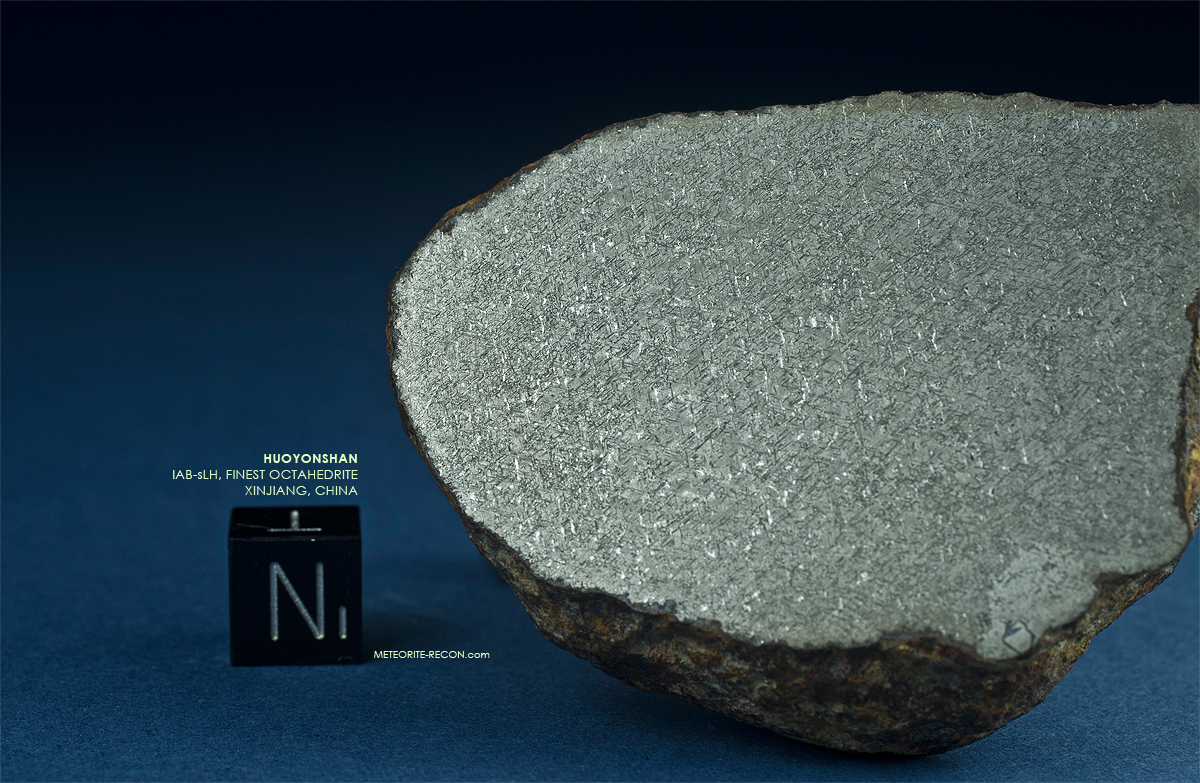 “The first piece was found on Oct. 6, 2016, by Mr. Yanzheng Wang and Jifa Li, workers from a nearby oil field, who were searching for wind-eroded stones on the desert. The find site is 15 km NE of the Mountain Huoyanshan, which was noted in the famous 16th century novel, “A Journey to the West,” as having emerged from pieces of charcoal on fire falling from Heaven. 18 more pieces were collected from a strewn field of 2 × 1.5 km2 during the following days. These irons weigh from 100 g up to 8.9 kg, with a total mass of ~45 kg. The news was leaked soon, and people rushed the desert to search for the irons with metal detectors. It is estimated that thousands pieces with a total mass of ~700 kg have been collected” (Meteoritical Bulletin no. 106).

With a band width of only <0.035 mm, Huoyanshan hides its beauty in the submillimeter range. Viewed with a loupe or stereo microscope, the iron reveals a unique, cryptographic pattern, perpetuating in bizarre cuneiform. Huoyanshan is hard to acquire, difficult to etch, and even more challenging to photograph, yet truly one of the most rewarding meteoritic irons to work with. 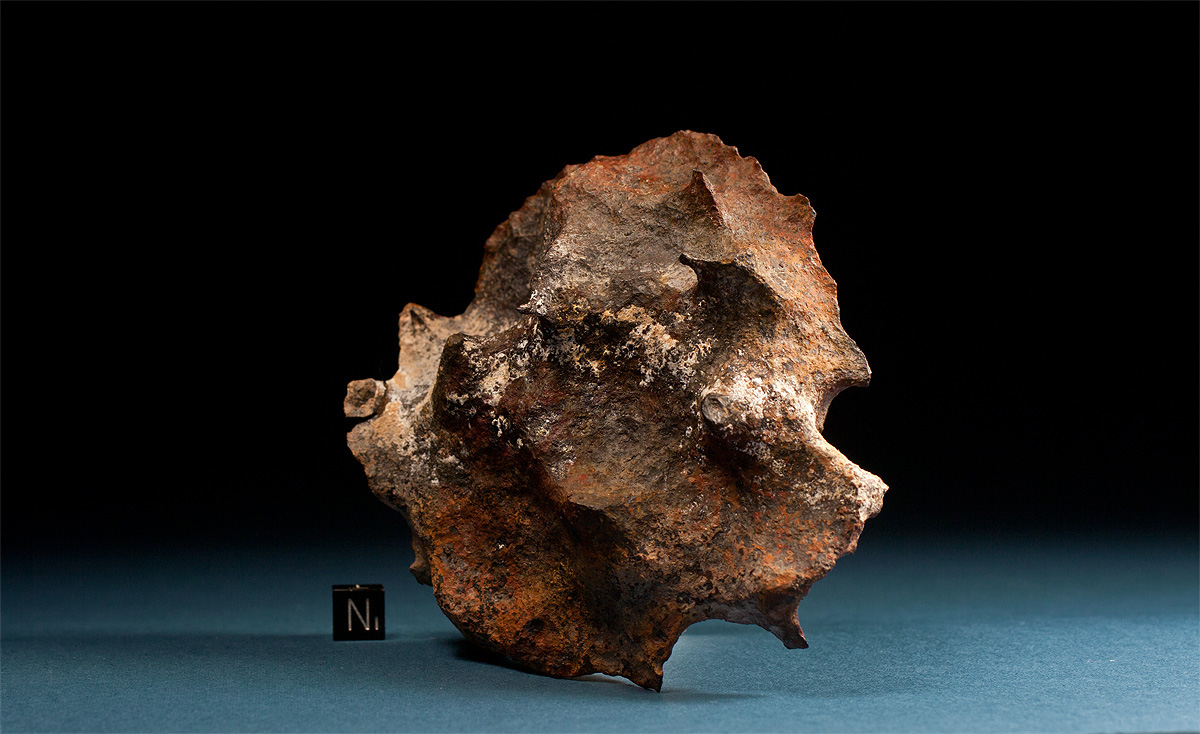 History: Found at 10:20 am on fine grained grano-diorite pediment. The flat, disk-shaped mass was stuck vertically in the ground, one third of the mass protruding from the soil.

This is a disk shaped iron with intriguing weathering pattern. Chemical erosion has reduced the initial surface and produced a set of protruding spikes up to 10 mm long. 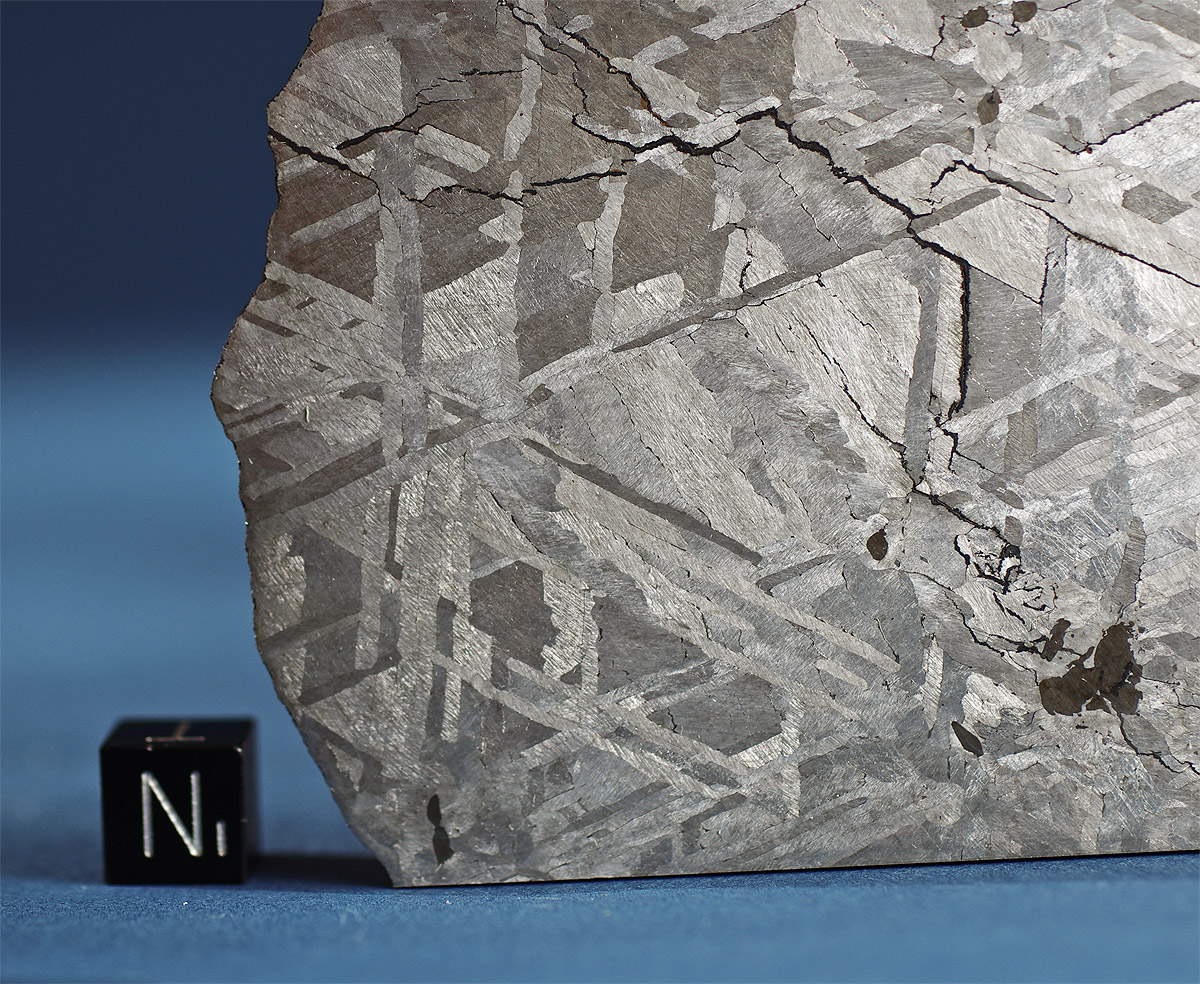 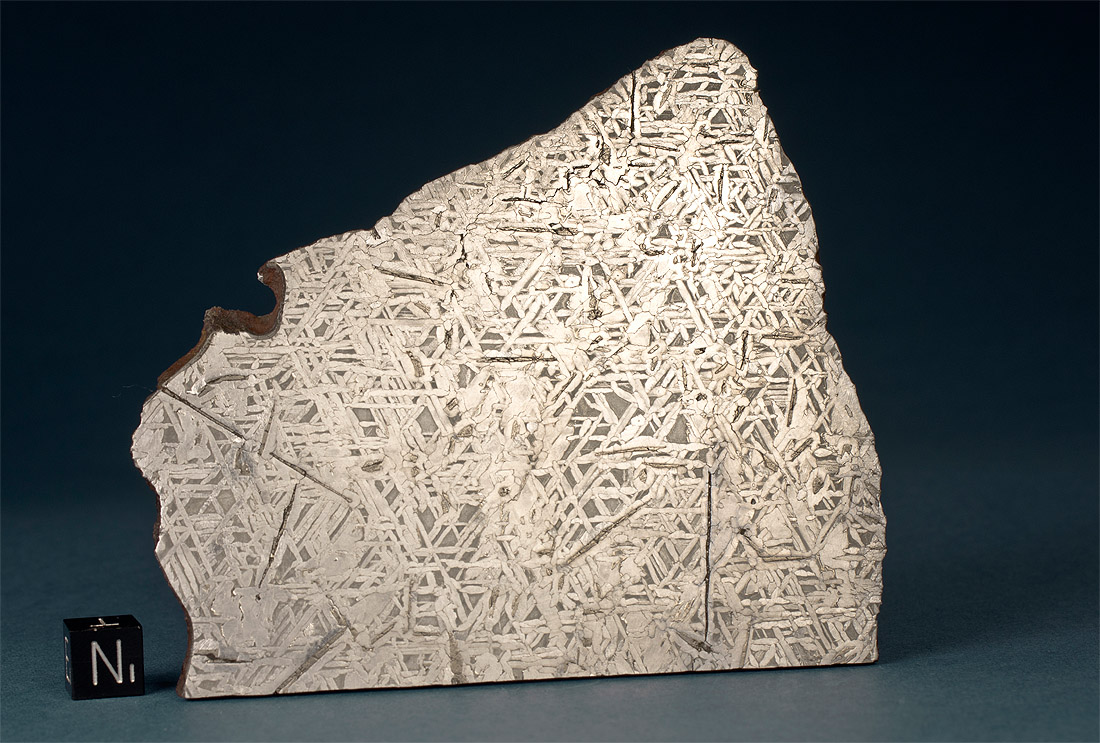 Found by Luc Labenne while searching fragments of the Imilac pallasite near La Mina Escondida in 2000. The 13.8 kg mass before cutting had average dimensions of 27 x 19 x 10 cm with a surface texture of small, circular shallow depressions, which is the characteristic weathering pattern of Atacama iron meteorites. This slice shows a bright etch with well defined Brezina lammellae. 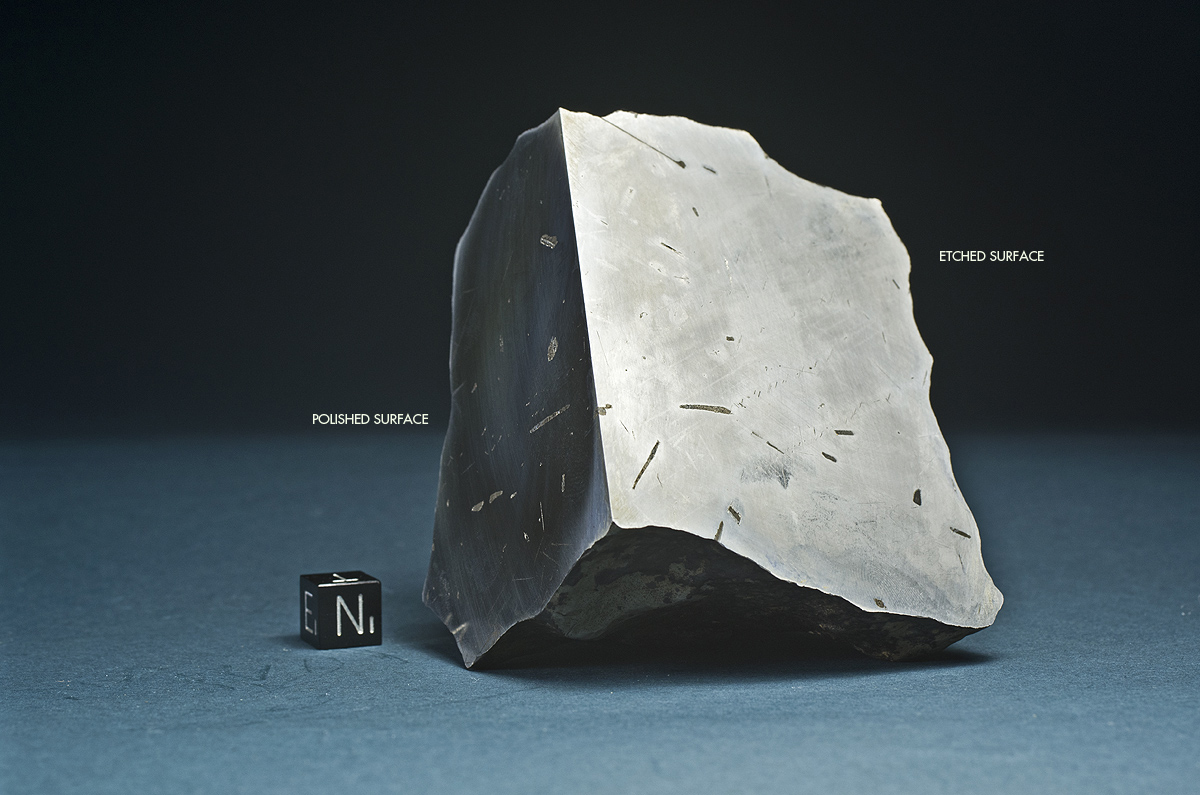 New iron meteorite find from the Mauritania-Algeria border, of which I acquired the single 4.9 kg mass from the finder. The compact mass shows an attractive wind polished blue to olive drab desert patina, as it is characteristic of several other iron meteorites from the Adrar region in Algeria. The polished and etched surface reveals geometrically arrayed rhabdite plates and several generations of Neumann lines, a characteristic of most hexaedrites. The iron has been classified at the University of Alberta, Canada. 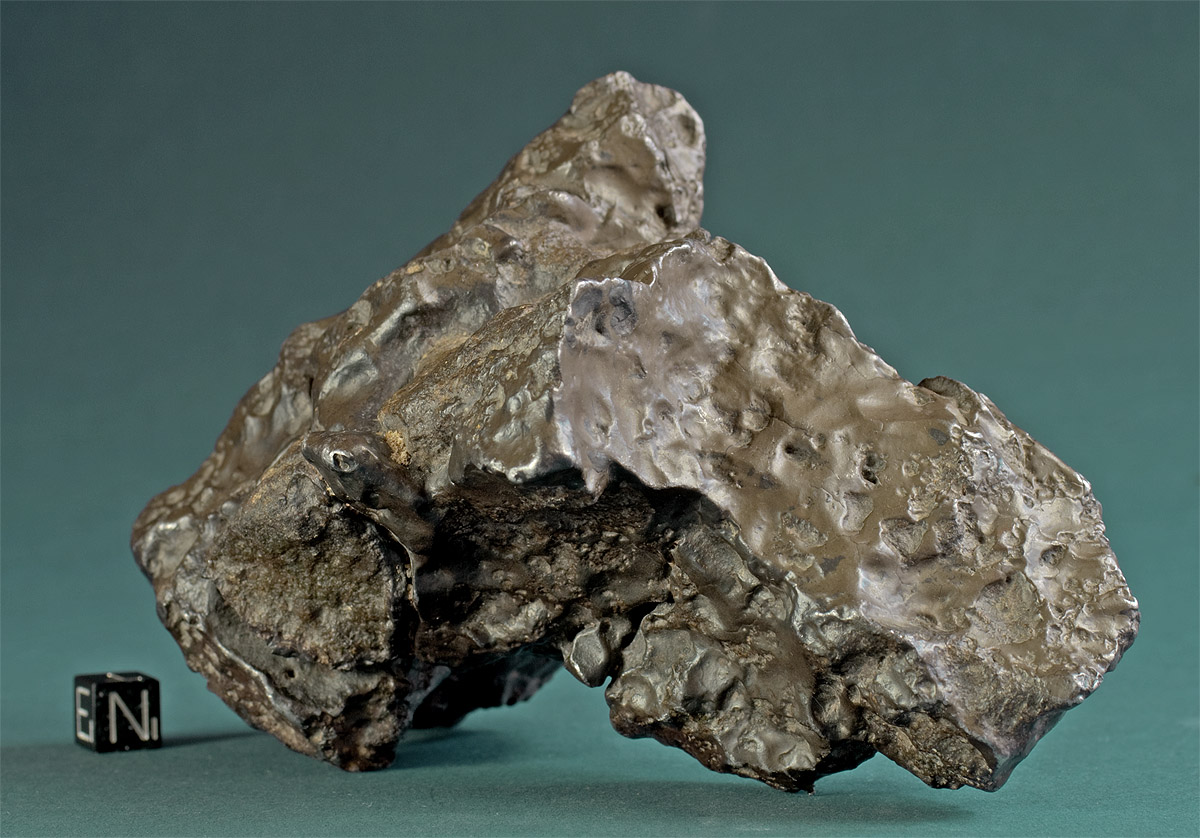 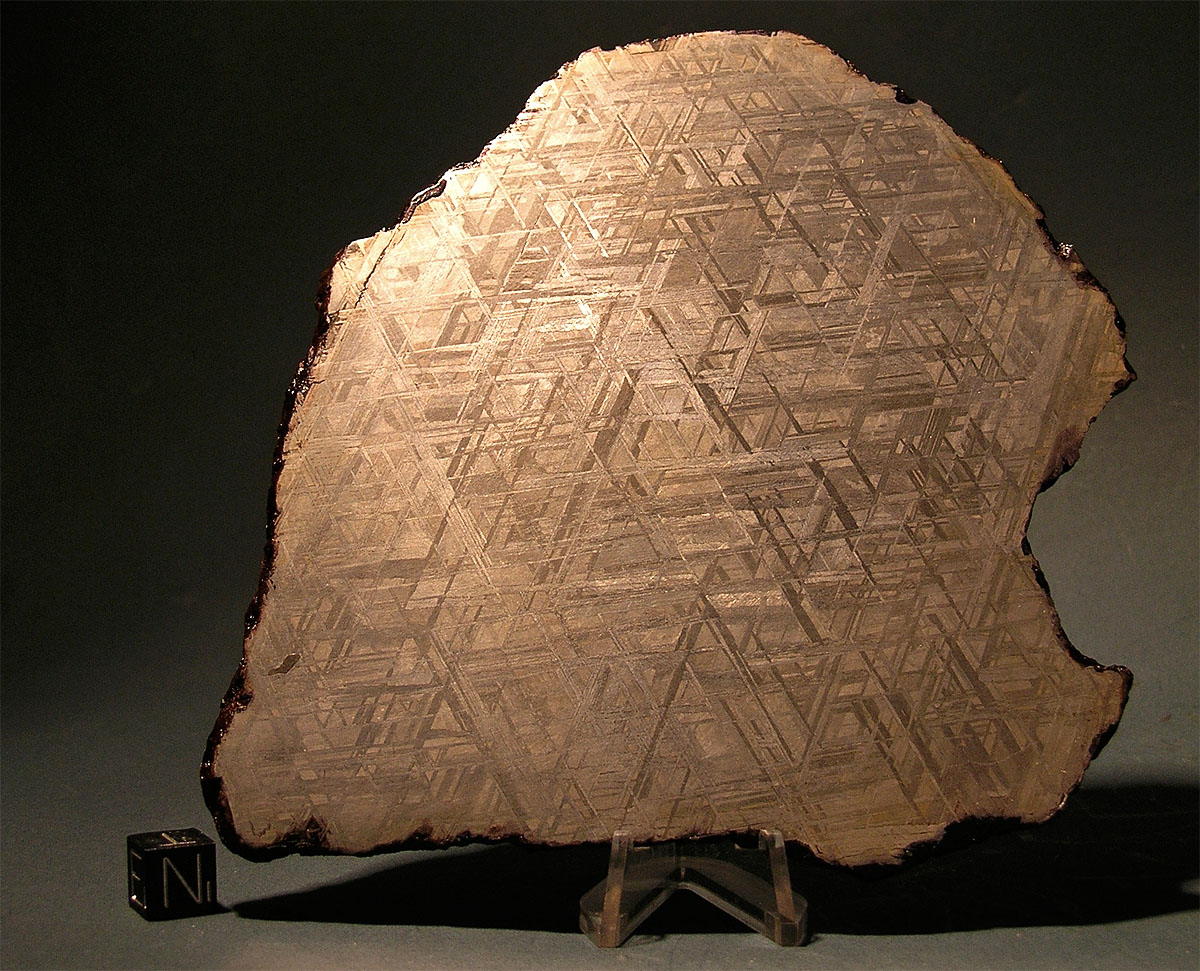 Many more masses have been found in a glacial moraine since the first discovery of a single meteorite in 1906 by Mr. Carl Henriksson. Muonionalusta is known for its striking Widmannstätten pattern. Because of the chloride-rich soil the Muonionalusta meteorites are recovered from, the iron tends to rust, usually from the edges towards the centre. This fullslice was kept for several weeks in an acetone bath and neutralized with an NaOH bath after the etching process. It remains fairly stable since. 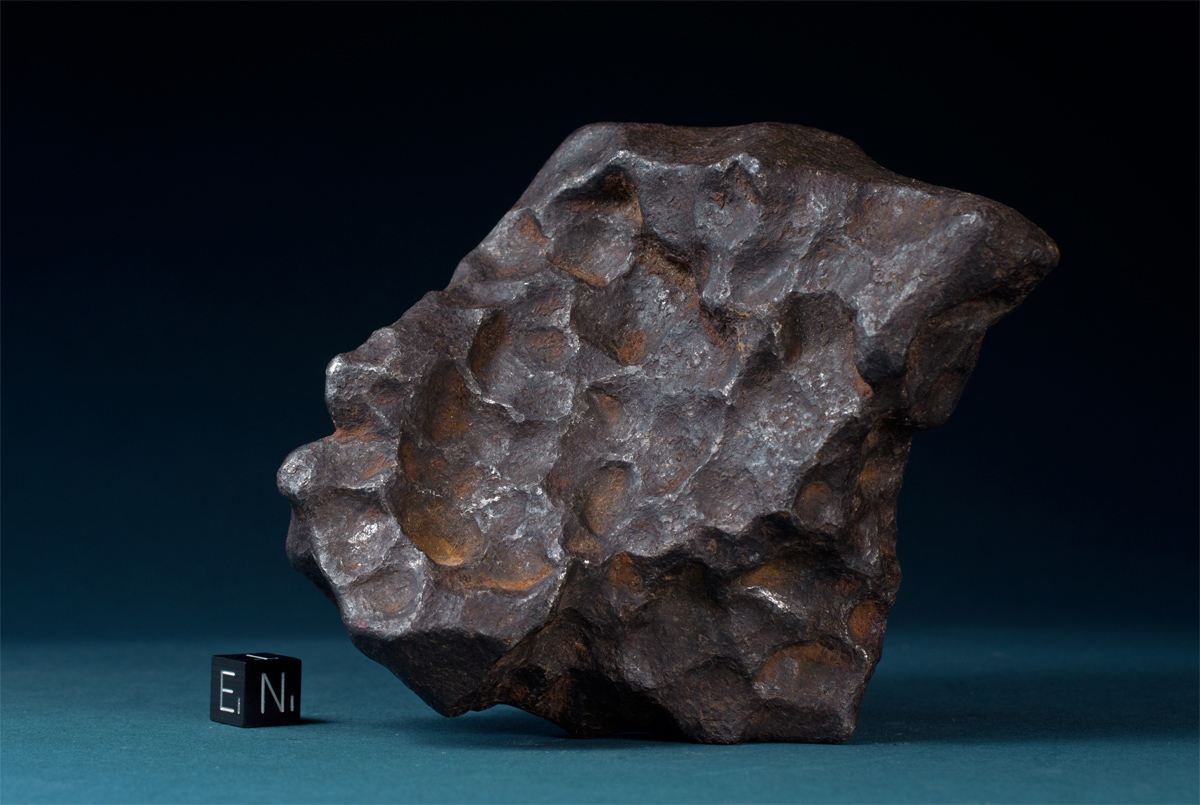 Shield-shaped mass with distinct regmaglypts on the trailing surface. Until 2010, several hundred specimens were recovered from the Taza strewnfield, inluding many dozens of kg-sized regmaglypted masses. Meanwhile, the find location is depleted. A two-week Russian expedition with state of the art metal detecting equipment that was conducted in Spring 2014 yielded no further finds.

The second collection specimen is a hield-shaped mass with distinct regmaglypts on the trailing surface. Until 2010, several hundred specimens were recovered from the Taza strewnfield, inluding many dozens of kg-sized regmaglypted masses. Meanwhile, the find location is depleted. A two-week Russian expedition with state of the art metal detecting equipment that was conducted in Spring 2014 yielded no further finds. 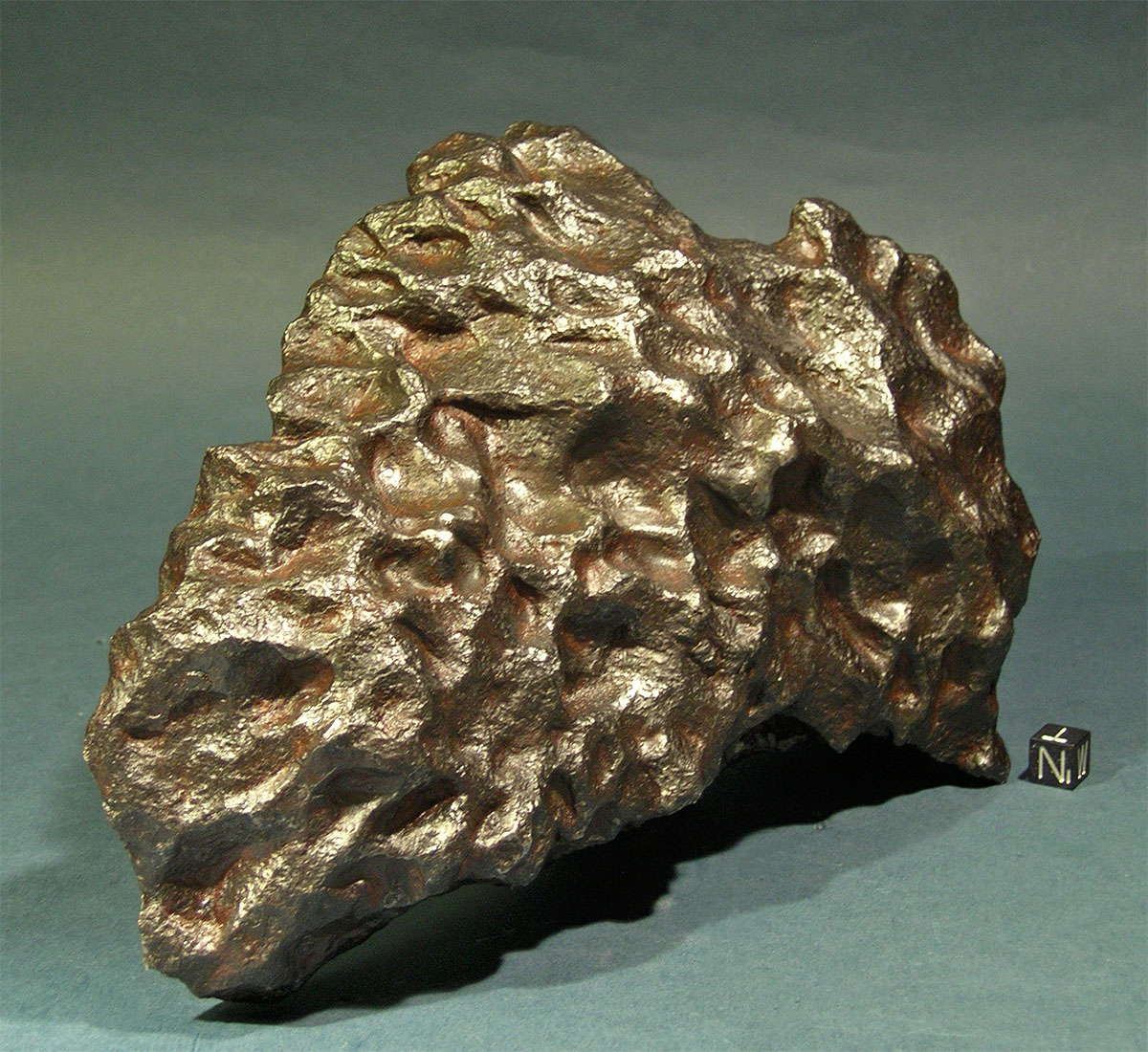 Oriented shield shaped mass of similar appearance to the Cabin Creek meteorite. The breast side is covered by deep regmaglypts still sheltering remnants of fusion crust on their bottom. The regmaglypts originate from the broad apex of the shield and shape into distinct furrows towards the edge. There are no regmaglypts on the concave trailing edge of the meteorite. Exceptional specimen and certainly the best oriented Campo del Cielo meteorite we have seen. 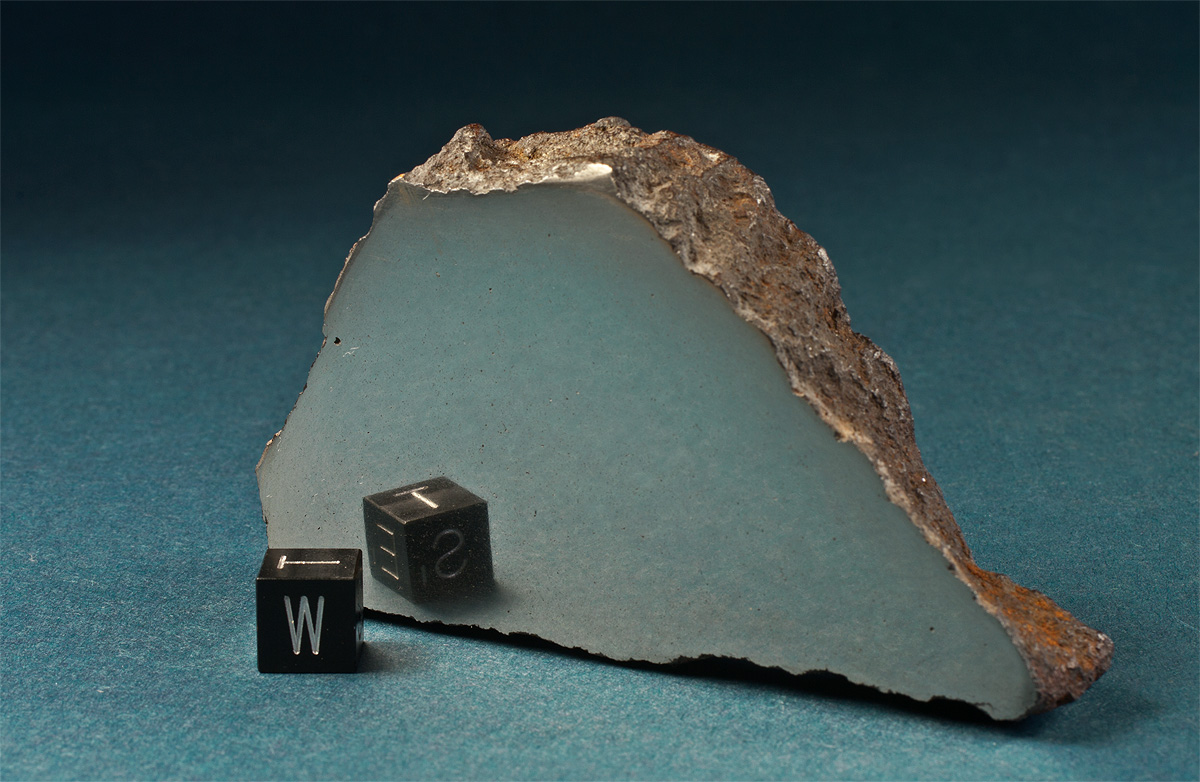