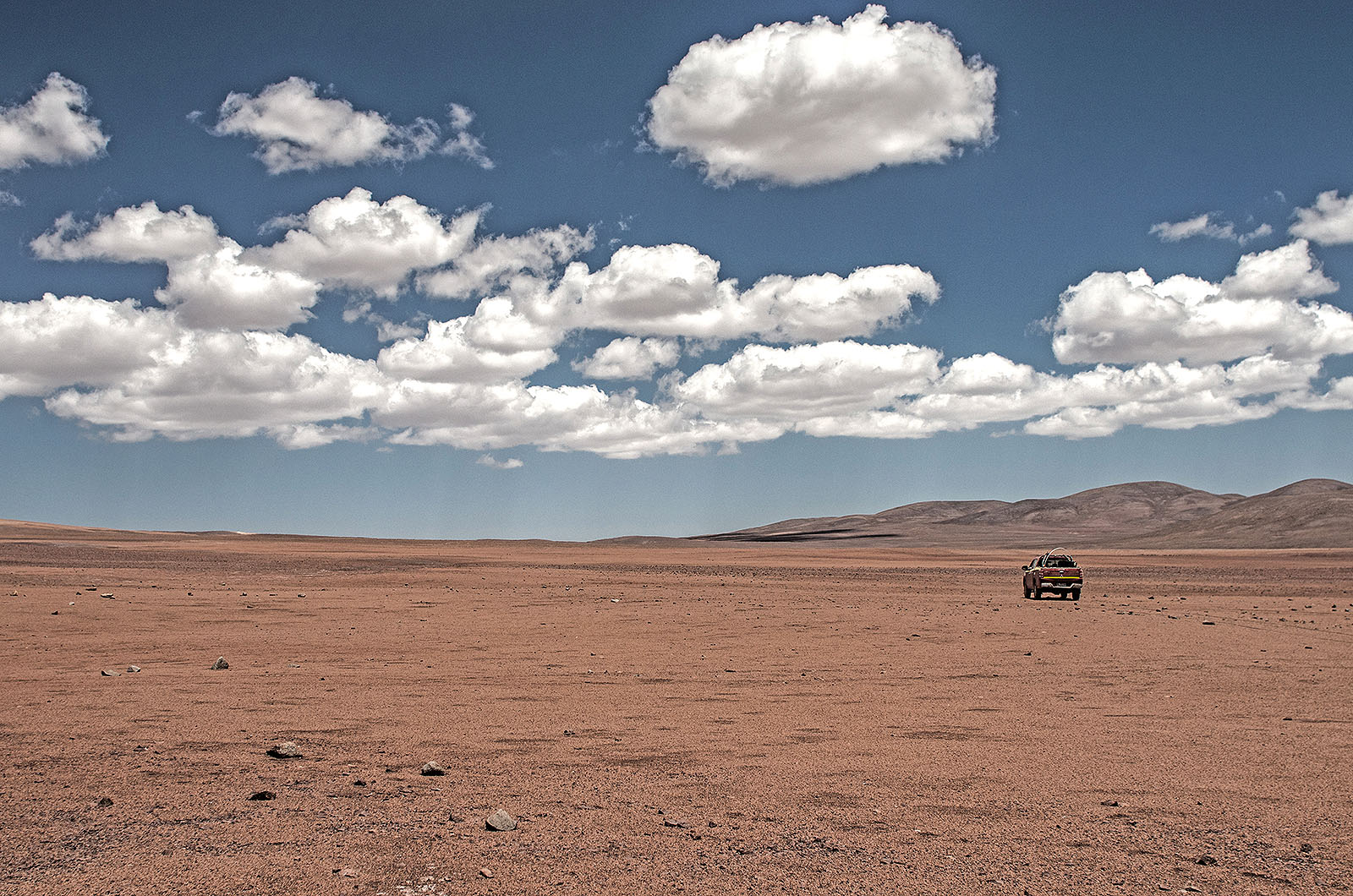 Thomas shared how they’d found it. After coming into an area that was littered with large boulders, they had decided to continue regardless the obstacles. They could see a new valley at the other end, which they wanted to explore. The terrain became more difficult and after some time they began to regret their decision. But by then it was already too late. The stretch ahead was now shorter than the distance they’d already covered. Eventually they emerged at the far side and a new, navigable surface opened. The first thing that Thomas caught sight of was a big black object straight in their path. What started out as a bold hope became a true miracle, when, against all odds, the big stone retained the characteristics of a meteorite. Resting on the ground, as if waiting for the two, was a chondrite of 35 kilos. Some meteoritic fragments were strewn about, either from the heavy impact or weathered off the main mass, one couldn’t tell for sure. As Sergey assured me, the return through the boulder field was a ride of pure joy.

This was all the motivation Peter and I needed and after the mandatory can of tuna, we were already in our seats again. The area that we were prospecting now was made up of rolling hills, intersected by occasional gullies and plains of coarser alluvial debris. The rest was small patches of limestone hamada and the light, orange grano-diorite pediment that we had already encountered in the Guanaco area. The granular top cover of the latter was a particularly tricky surface to search. Since it provided a high background contrast to any darker objects, one tended to give these surfaces only a quick glance. Too quick, as it turned out that meteorites on the pediment took on the very same color as the background. With the exception of very fresh meteorites, even specimens with a mass of half a kg and more tended to blend in perfectly with the underground and could be seen only from close.

The pediment was in fact a desert pavement that capped a gypsum-rich paleo soil. As could be seen in places where gullies cut through the sediment, the thickness of this soil reached 2-3 meters in the valleys, and at least 0.5 meters on the plains. According to the literature it was rich in halite and other salts and had an incredible age of 5 – 8 Ma. As our modern maps lacked a name for the place we had chosen, I used the one from the Mapa Jeografico de la Puna de Atacama published by the Officina de Límites in 1905. Exactly where we stood, the stained paper read “Sierra del Muerto.” This was totally our sense of humor.

Despite fierce commitment to the search, Peter and I did not achieve much during the day. While I did find a small weathered specimen of about 100 grams, this was everything we could show after four more hours of searching. Less than hundred meters up on the slope from where I had found the piece, Marc and Andi ridiculed our efforts by collecting another 30 or so individuals and fragments that were probably of the same fall event.

At the end of the day, I drove up a shallow ridge and on the far side we saw a secluded valley, framed by rocky hills and perhaps a kilometer by two wide. The place had only few tracks and looked like the perfect hiding place for cosmic visitors. We crossed it two times north to south and enjoyed searching the bright red pediment that had only few rock fields mixed in here and there. Just after I had made a final turn to set course for the evening camp, Peter called “stop” and went to inspect a rock. When he returned and peered through the open door he didn’t have to say anything, his face gave it all away. “Really?” I asked, not yet totally trusting the eye of the apprentice. “If this isn’t the real thing, I’m at my wit’s end,” he offered. 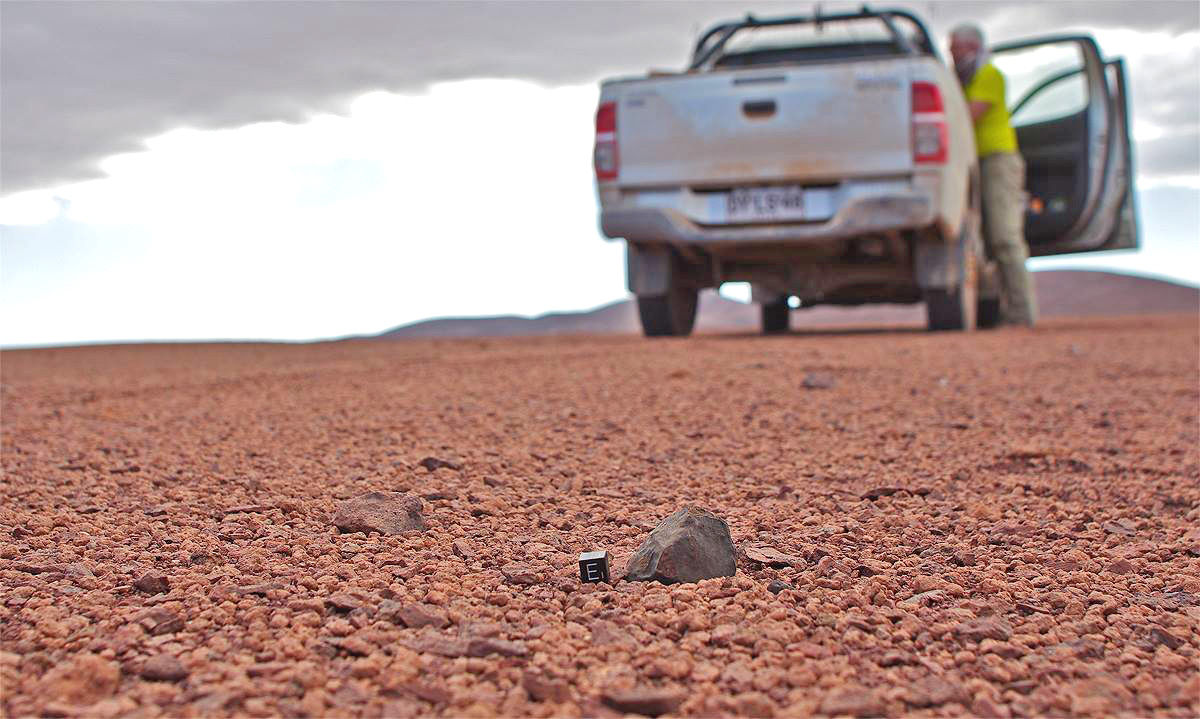 I trudged over to his find and was immediately thrilled by what I saw. A meteorite with true black fusion crust, not too big, maybe 100 grams, but quite fresh, as if fallen just a couple of decades ago. The crust was chipped at a few places and only on the grey matrix underneath there was some oxidation. It was Peter’s first chondrite!

Elevated we returned to the evening camp, where another ceremony was held, in which Peter was promoted from apprentice to “Aventurero” and given the appropriate patch. In addition, we awarded him the title “Don” and from now on referred to him as “Don Pedro de Atacama.” Our offering stone was put to use once more and under Sergey’s guidance the meteorite goods received their fair share of spirited beverages, carots and beans.

After three days in the Sierra del Muerto, we had become quite familiar with the valleys and hills and there was hardly an acre of searchable surface that was not cut by a pair of tracks or zig-zagging footprints. Yet we still found meteorites. In average about three finds per car and day. The tracks, even our own ones, had little significance in terms of whether a place was searched out. In the beginning, the tracks had made us think that an area with lots of them was dry. Now, in this stage of the search, we completely ignored the tracks or even took it as a challenge to find meteorites close to or right next to them, which we succeeded in several times.

During the long hours of the search, we had made it a sport to derive fundamental principles of meteorite searching and named them the “The book of wisdoms of Don Pedro de Atacama.” “Thou shalt not believe the tracks, for they want deceive thou,” became one of our favorites. Another one was “Thou shalt not search the riverbed, for it will eat up time and tires.” From this last one we soon had to make an exception. It was after we had searched the place of Don Pedro’s first find for another half a day, when I navigated the Hilux into a debris plain that made up the eastern extension of the valley. Searching between the big rocks of various colors was very exhausting for the eyes, and for this reason we limited excursions into the rock fields to an hour or less. On the return leg, I crossed a small arroyo and just in the middle of it Peter said “stop!” and jumped out. 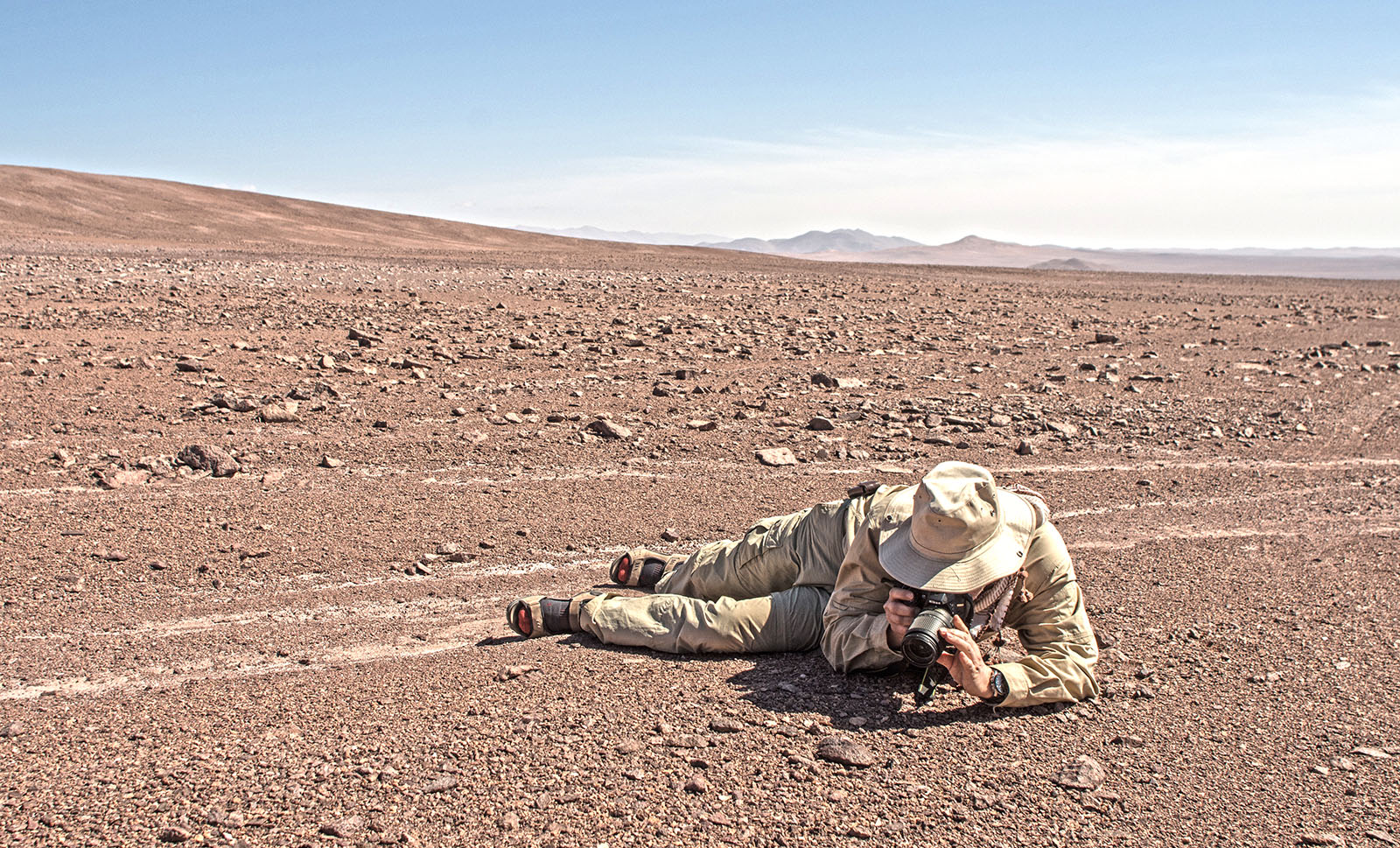 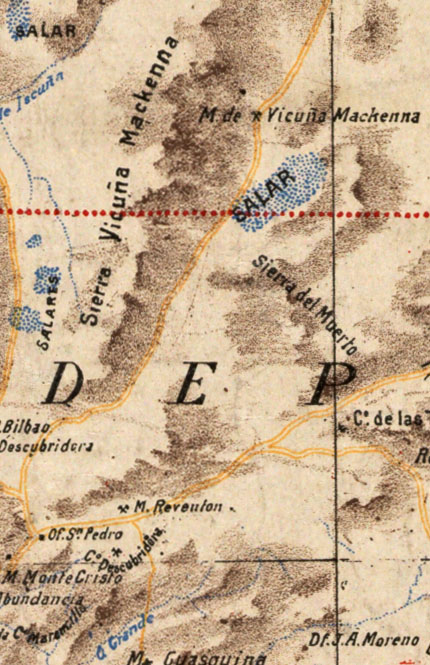 As the modern map lacked a name for the area we were prospecting, I used the one from the Mapa Jeografico de la Puna de Atacama published by the Officina de Límites in 1905. Exactly where we stood, the stained paper read “Sierra del Muerto.”

I looked through the door that he had left open and saw him inspecting a rock that did not distinguish itself in any aspect from the surrounding rocks, yet still he waved me over, saying “it is one!” I killed the engine and dismounted. “What have you got there?” “Meteorite!” Peter replied.

Only from very close I recognized a weathering crack and a coarse grained fracture plane that with some good will indicated a shocked meteorite. There was no color difference to the debris strewn around. The test with the magnet and a closer inspection with a loupe provided certainty. The weathered chondrite offered only a fractional difference in texture and color to the surrounding rocks, and yet already from the passing car, Peter had made the right call. I wondered if I’d have spotted this specimen.

In the afternoon, we refilled our tanks from the canisters. In order to maintain a continuous exchange of tactics and experience, we switched vehicles. I decided to ride with Thomas while Peter joined Sergey. Peter and I had a very similar way of working, and adjusting to Thomas was a bit of a challenge. I had merely driven fifteen meters, when Thomas called “halt!” for the first time and got out to look at something. After two minutes, he was back. And it continued this way. It felt, as if I had to stop every 30 seconds because Thomas had seen something that required closer inspection. On each of these stops it appeared that he couldn’t quite figure out what he wanted to look at, so he stood for a while or wandered around contemplating, in search of some worthwhile target. I suggested that we’d walk instead, so I’d have something to do as well, but no, he preferred driving, and so we went on.

After continuing in this manner for an hour, we had covered a distance of a little less than a kilometer and because I knew that success in this trade was directly related to the number of square meters covered, my patience slowly but steadily began to wear out. As we passed another larger rock that was quite obviously a local basalt, Thomas, once again asked me to stop. While he climbed out, I drummed my fingers on the dashboard, thinking about how to tell him to rather inspect targets with a higher probability. Then I heard a shout of excitement, “Svend, Svend, I’ve got one!”