Meteorite Recon | Sulagiri Meteorite fall, Hosur, India, documentation, history and research, meteorite photos
Several eye witnesses claimed that a thick smoke trail was following the Attakurukki mass to the ground. Witnesses in Kammandody, less than 3 kilometers from Attakurukki, explained, that they would not have noticed the object falling, if it would not have left a black trail behind on its way down to the surface. Although smoke trails reaching to the ground have been described by witnesses of meteorite falls before, this phenomenon is rather characteristic for larger masses, mostly irons, which sometimes retain higher velocities during their crossing of the lower atmosphere.
Sulagiri Meteorite fall, Hosur, Krishnagiri, India, documentation, witness reports, impact pit, meteorite strewnfield map, meteorite photos
4349
page-template-default,page,page-id-4349,page-child,parent-pageid-4282,eltd-core-1.0.1,ajax_fade,page_not_loaded,,borderland-ver-1.8, vertical_menu_with_scroll,smooth_scroll,paspartu_enabled,paspartu_on_top_fixed,paspartu_on_bottom_fixed,transparent_content,grid_1300,wpb-js-composer js-comp-ver-6.0.3,vc_responsive,elementor-default,elementor-kit-6471 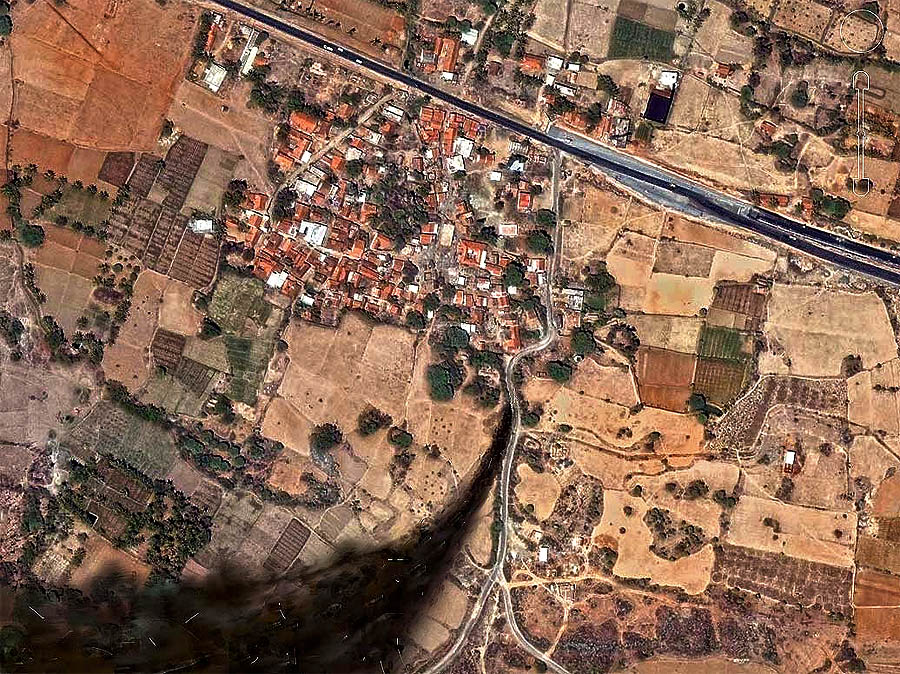 “Two seconds to impact”. Artist’s impression of the eye witness accounts on the fall of the Attakurukki mass

Several eye witnesses claimed that a thick smoke trail was following the Attakurukki mass to the ground. Witnesses in Kammandody, less than 3 kilometers from Attakurukki, explained, that they would not have noticed the object falling, if it would not have left a black trail behind on its way down to the surface. Although smoke trails reaching to the ground have been described by witnesses of meteorite falls before, this phenomenon is rather characteristic for larger masses, mostly irons, which sometimes retain higher velocities during their crossing of the lower atmosphere.

Due to the cooling of the falling meteorites in the lower atmosphere and contrary to the general opinion, most meteorites are cold, sometimes frozen, when they hit the ground. Yet with the eye witness accounts in mind, it can not be completely ruled out that the main mass, which impacted in the village road in Attakuriki, still draw a soot trail behind it in the last stage of its flight. The artist impression above considers these eye witness accounts and attempts to capture the moment a few seconds before the impact of the main mass at the Attakurukki village road (upper right corner).

According to residents in the Hosur area, local radio stations had already started to report the event on the evening of September 12. These reports stated, that government officials had repeatedly denied the possibility of a meteorite fall. It was speculated that an accidental bomb drop or a terrorist attack was responsible for the detonations witnessed in the morning. The first internet report on the Honsur event was launched in the night after the meteorite fall on Saturday September 13, 2008 at 03:25 AM IST by Express News Service. At that time only two masses were known to the investigators. The report read:

“Hosur witnesses shower of meteorites. HOSUR: Villagers near Hosur panicked when two giant stones possibly meteorites fell from the sky on Friday morning. According to police sources, 50-kg stone fell from the sky at Ullukuruki village around 8.30 am. The impact created a threefoot deep and five-foot wide crater. Eyewitnesses Doraiswamy and Padbhmanan said that the stone fell from the sky with loud noise. They also said that heavy smoke appeared in the sky when the stone hit the ground. At the same time, another stone of the same size fell in similar style in Ranthnapalli village, which is very close to Ullukuruki village, police said. Revenue officials recovered the stones and kept it in the taluk office in Hosur. (ExpressBuzz 13 Sep 2008 03:25:00 AM IST).” 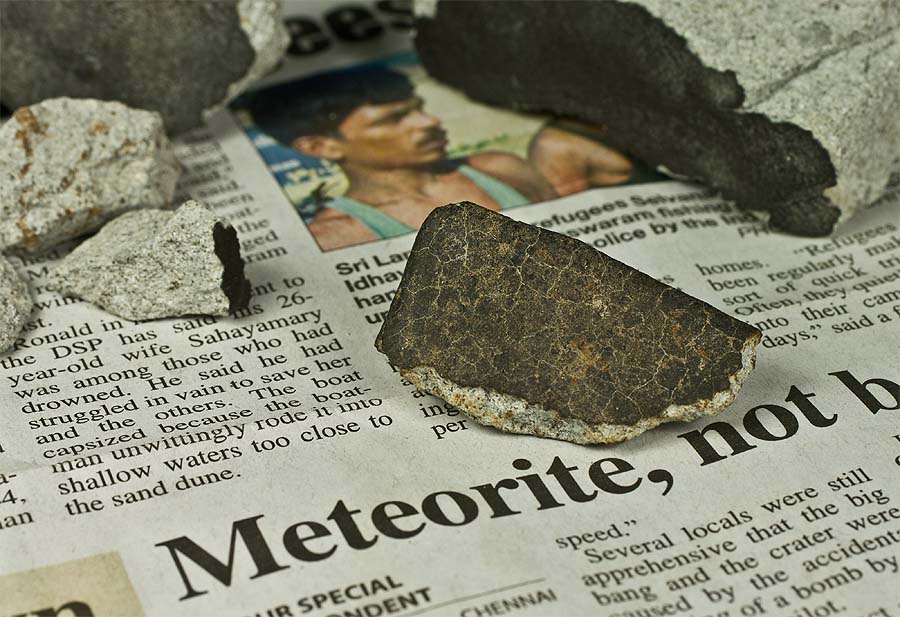 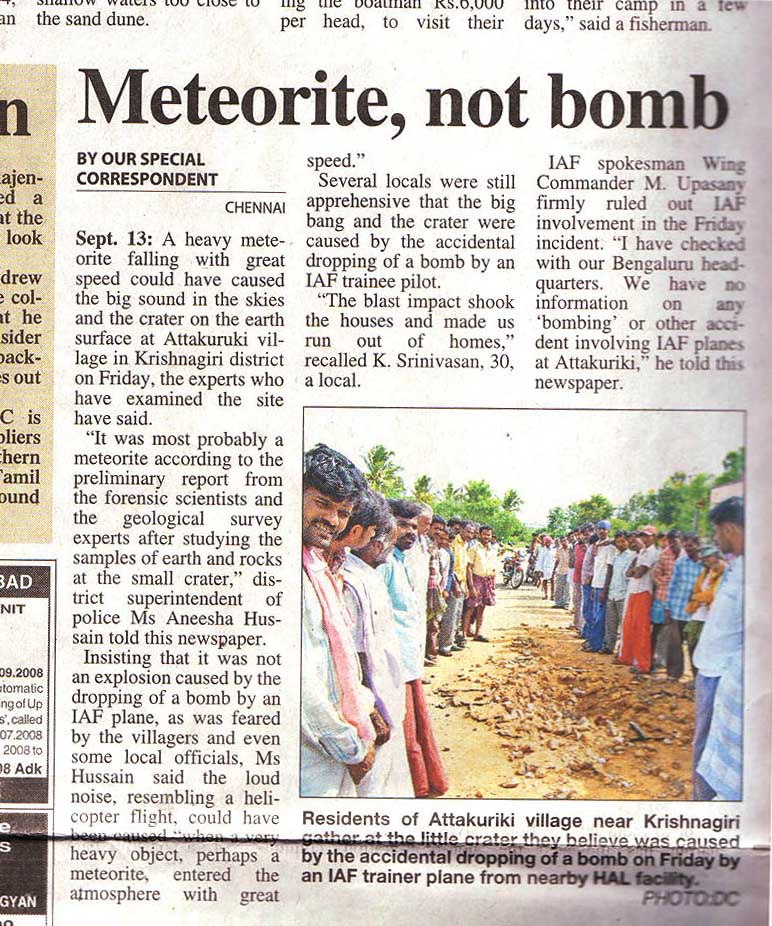 One day later, on Sunday September 14, the number of known impacts climbed to four. The article by DNA India correspondent Kunal Chatterjee confirms the meteorite fall by referring to the GSI and the District Revenue Officer, N. Nagarajan as sources.

“Tremors in B’lore were due to meteorite impact. By Kunal Chatterjee. BANGALORE: The Friday morning tremors experienced by south Bangaloreans has been attributed to a meteorite shower in Hosur taluk, according to preliminary investigations conducted by a combined team of Geological Survey of India (GSI) and Forensic Science Laboratory, Chennai. The meteorites slammed into roads and agricultural fields in the two villages of Attakuruki and Kamanadody in Hosur taluk in Krishnagiri district of Tamil Nadu. On Friday morning, villagers of these sleepy villages woke up to thunderous explosions which left them numb. Krishnagiri District Revenue Officer, N Nagarajan, told the DNA that in four different locations in the two villages the meteorites left craters varying from 1.5 feet to four feet in diameter. Both the villages are about 20 Kms from Hosur. The villagers reported about seeing fiery trails descending down, dangerously close to their houses.

One of the objects crashed in the middle of a village road causing a four-feet wide crater. At least one was reported to have fallen into an agricultural field leaving behind a small crater in the slushy ground. A senior team from the Forensic Science laboratory in Tamil Nadu, which arrived at the scene about 28 hours after the shower, was found picking up the pieces from the remains of the “stones from the skies”. The team is taking the samples back to their laboratories to analyse their chemical composition. Nagarajan said that they had received a fax letter from GSI, Chennai, soon after the incident. The GSI director in Chennai had issued parameters to the district officials to positively confirm that the fiery shower was indeed that of meteorites.” (DNA Bangalore Sunday, September 14, 2008 04:06 IST)

“Meteorite, not bomb. A heavy meteorite falling with great speed could have caused the big sound in the skies and the crater on the earth surface at Attakuruki village in Krishnagiri district on Friday, the experts who have examined the site have said.

It was most probably a meteorite according to the preliminary report from the forensic scientists and the geological survey experts after studying the samples of earth and rocks at the small crater,” district superintendent of police Ms Aneesha Hussain told this newspaper.

Insisting that it was not an explosion caused by the dropping of a bomb by an IAF plane, as was feared by the villagers and even some local officials, Ms Hussain said the loud noise, resembling a helicopter flight, could have been caused “when a very heavy object, perhaps a meteorite, entered the atmosphere with great speed.” Several locals were still apprehensive that the big bang and the crater were caused by the accidental dropping of a bomb by an IAF trainee pilot.

“The blast impact shook the houses and made us run out of homes,” recalled K. Srinivasan, 30, a local. IAF spokesman Wing Commander M. Upasany firmly ruled out IAF involvement in the Friday incident. “I have checked with our Bengaluru headquarters. We have no information on any ‘bombing’ or other accident involving IAF planes at Attakuriki,” he told this newspaper.” (Deccan Chronicle, September 14, 2008)

Analysis and classification of the meteorite

With the publication of the analysis results in the data base of the Meteoritical Bulletin the Hosur meteorite shower received a new name. It is now known as the Sulagiri meteorite (Meteoritical Bulletin, no. 96, MAPS 44). The meteorite was found to be of chondritic composition and been declared a LL6 type. Fragments and nearly complete individuals totalling 110 kg were recovered from the strewnfield.