Part 2: From Assamaka to Arlit 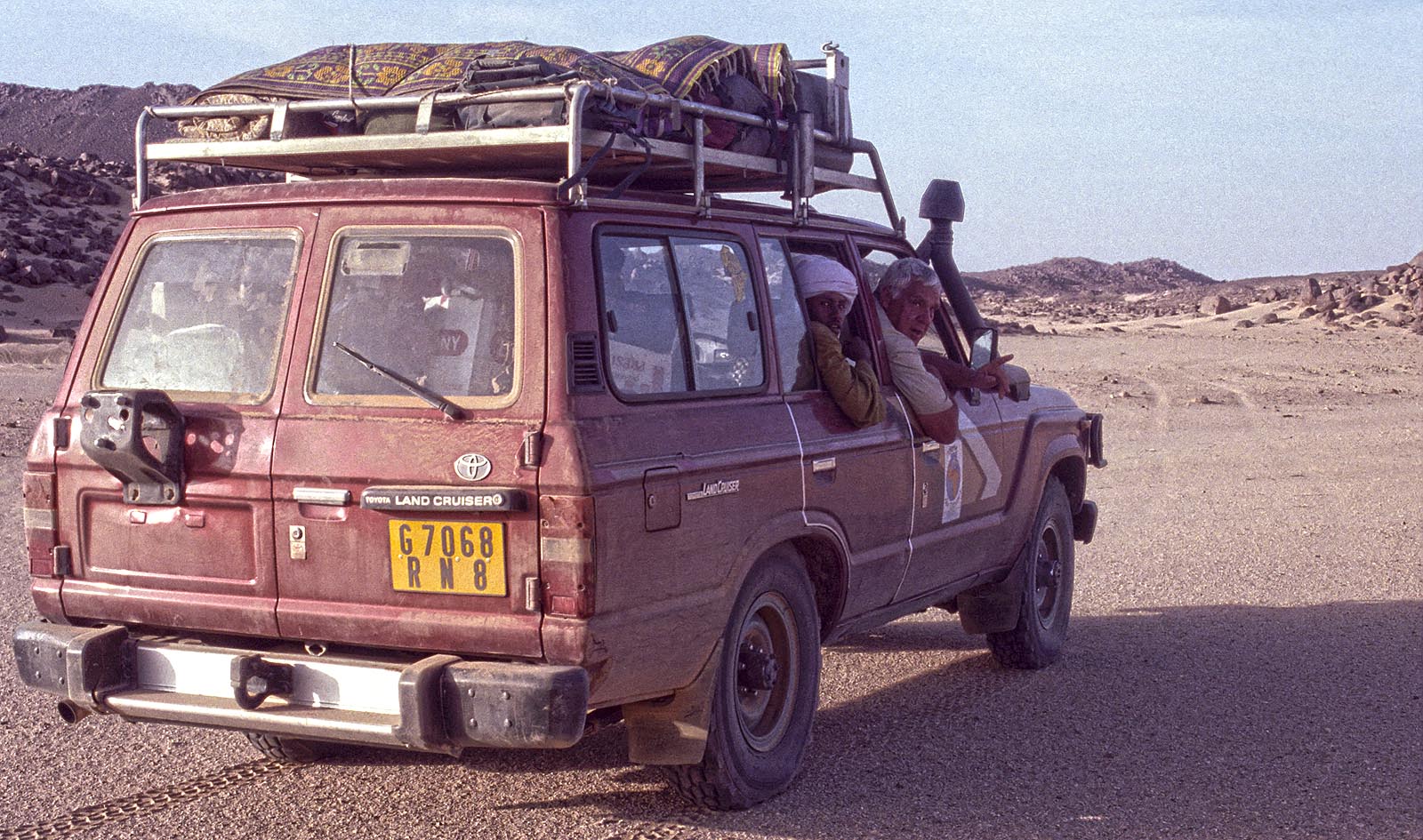 Crossing the Air Mountains west to east, approaching the gate of the Ténéré. S. Icha and J. Meineke

Back then, a relatively humid climate prevailed over the Sahara. There were lakes and small creeks and a savannah vegetation covered the basins east and west of the Air. These conditions offered an excellent habitat for extensive big game populations. Those, in turn, provided sustenance for the nomadic hunters near the end of the Epipaleolithic age. Our archaeologist, “Wellington” Hecker marks the GPS coordinates and collects a sample from a charcoal rich soil layer to try and date it back home. We are eager to determine a minimum age of the site to complete our surface data for the area.

Throughout the afternoon, we repeatedly come across ancient gravel plains that we had failed to identify on the satellite images. These areas have a high content of dark and rounded surface rocks. They date in a time when heavy annual rainfalls in the Air Mountains formed wide alluvial fans and transported river deposits deep into the Tamesna plain. Since these rocks predominantly show the dark lithologies of mafic and volcanic rocks of the Air massif, they are indistinguishable from the equally black meteorites we search for and thus pose as abundant potential targets. The discovery means a serious setback for us since prospecting from the comfort of the vehicle, which is essential in order to cover a sufficiently large ammount of surface, is impossible under these circumstances.

As we move away from the Pleistocene river deposits the following day, we change courseand continue in south-easterly direction. Its not until early midday that a shallow plateau comes into view that bears no sign of rocky debris on its surface. Tension rises as our Land Cruisers cautiously navigate uphill through winding gullies in the escarpment. Up on top of the Plateau, a bright limestone gravel surface awaits us, on which meteorites, should they be there, could easily be recognized. Maintaining walking speed, we follow a zigzag course calculated by our GPS to cover the terrain to a maximum extent. With binoculars we scan the ground with determined concentration, yet we’re no match to the ultimate eyesight of the Tuareg, who always beat us, spotting any potential target long before us.

Searching for meteorites in the Timmersoi, Niger, Spring 2002

Shortly before we have to suspend the search due to the brutal midday heat, we finally succeed. The second vehicle mirrors a signal. Souleymane has spotted a dark rock. A test with the magnet suggest an appreciable amount of iron, which is always a good sign. Even stone meteorites contain a detectable fraction of fine grained nickel-iron. As I come up, the team stands reverently silent in front of a chestnut-sized pebble that rests on the bright surface. They are waiting to hear the judgment of the “mudir”, expecting me to share my wisdom and tell meteorites from ordinary rocks. As a matter of fact, I had never seen a meteorite in the field myself and my concept of how one was supposed to look like was rudimentary at best.

My initial impression is, no doubt, it came from outer space. The dark layer of oxide to me suggested the specimen had already spent a considerable amount of time exposed to the elements in the desert. The pitch black melted crust a meteorite shows after its fiery passage through the atmosphere and which one would expect to see on a meteorite collected freshly after its fall, was absent. It must have weathered away, I was convinced. This piece of rock might just as well be lying around here for the last 5,000 years. I looked for other evidence of a fiery encounter with our planet. There were small dimples on the rock, which I took for regmaglypts. These are small depressions, formed by the atmospheric-induced turbulence on a meteorite’s surface during its penetration of the upper atmosphere. To make a long story short: As it turned out later in the lab of the Mineralogical Institute of Hamburg University, I marveled not at a meteorite but at an ordinary chunk of ferritic sandstone, albeit with a thick coating of desert patina. It took me some time to learn one of the basic rules of meteorite prospection: If it looks and feels like an odd rock, then that’s probably exactly what it is, not a meteorite. 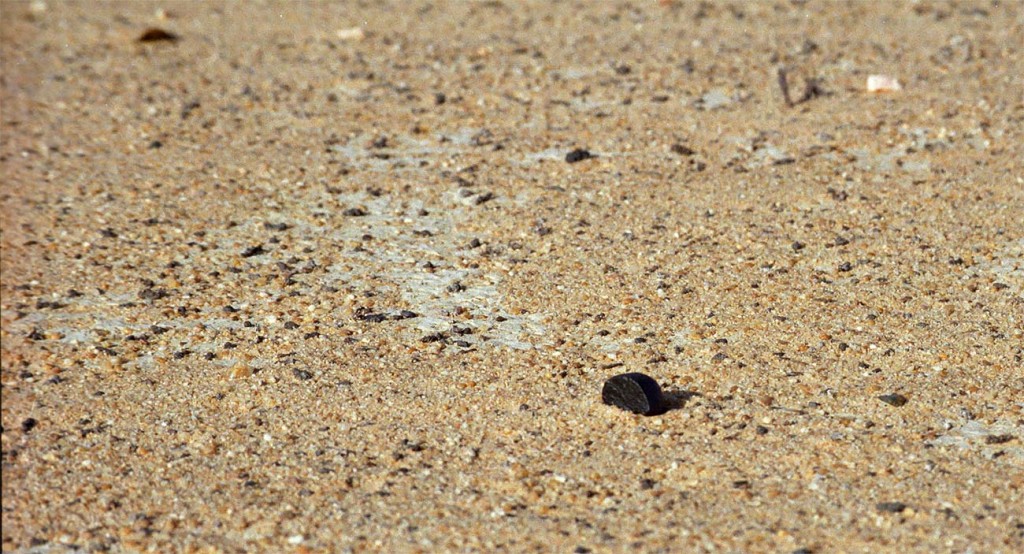 A meteorite, it appeared, but analysis back home revealed this find as a fluvially ablated and desert varnished chunk of ferritic sandstone

How would a meteorite end up in this desert anyways? In a nutshell: Collisions of celestial bodies can release gigantic clouds of debris that might overcome the gravity of their parent body and start to float in different orbits around our central star. From time to time, these chunks of rock become attracted by other bodies in our solar system and get diverted from their initial course or captured by them. The large planets with thin atmospheres particularly are under frequent bombardment of these asteroid fragments.

Earth is a target as well. Day after day, thousands of meteoroids rain down on our world. Most of them are tiny specks of rocks that disintegrate completely and early during their entry. But about five to ten times a year, larger specimens are witnessed to fall onto the surface of Earth and fragments are recovered. Those who have had the fortune to experience the rare sight of a Meteorite fall, report spectacular sound and visual phenomena. Forked lightning out of the blue, whizzing sound as if hot metal had come in contact with water, smoke-trails, thunder and sonic booms are sights experienced by witnesses of meteorite falls. Some reports even include feeling electrostatic sensations or the pressure wave of sonic booms during these encounters.

Even for our desolate search area such a wittnessed fall is reported. At the afternoon, on August 21 in 1997, a fireball followed by a huge smoke trail and accompanied by a series of explosions terrified a seven year old Tuareg boy. He was tracking a stray goat in the Wadis at the foot of Mt. Tazerzait and found the rock in ist impact pit the following day. A sample of the strange body that fell out of the sky was later reported to scientists in Niamey and turned out as an ordinary chondrite, the most common type of meteorite. The boy and his brothers returned to the impact site with a hammer to break the large rock into transportable loads and retrieved another 110 kilos of material. The original mass, however, was supposed to have been considerably larger.

And we are lucky too this day. A small unimpressive pebble that Alhazan has picked up, not even 30 grams, turns out as a chondrite with a high ammount of iron. This time, we have found a meteorite. While searching the closer surrounding we make another discovery. Together with neolithic ceramic, silex blades and two grinding stones we find small lumps of iron ore. A natural occurrence of the iron at this location can be excluded. Remains of slag, abundant at the finding site, suggest that the iron ore was brought to this place to smelt it.

But apart from the coincidence, there is no direct link between the meteorite and the neolithical activity in the area. However, there is reason to believe that the late neolithic inhabitants of the Sahara collected meteoritic iron systematicly and that they also worked tools out of this extremely superior material. Archaeological finds from northern Europe, Persia and from ancient Egyptian tombs support this hypothesis. The hieroglyph used by the ancient Egypts to express the term “metal” can be translated as “iron that fell from the skies”. And the most prominent example for the pharaonic knowledge of extraterrestrial iron is a dagger made of meteoritic iron that Howard Carter discovered among the burial objects in the tomb of Tutankhamun in the Valley of the Kings. 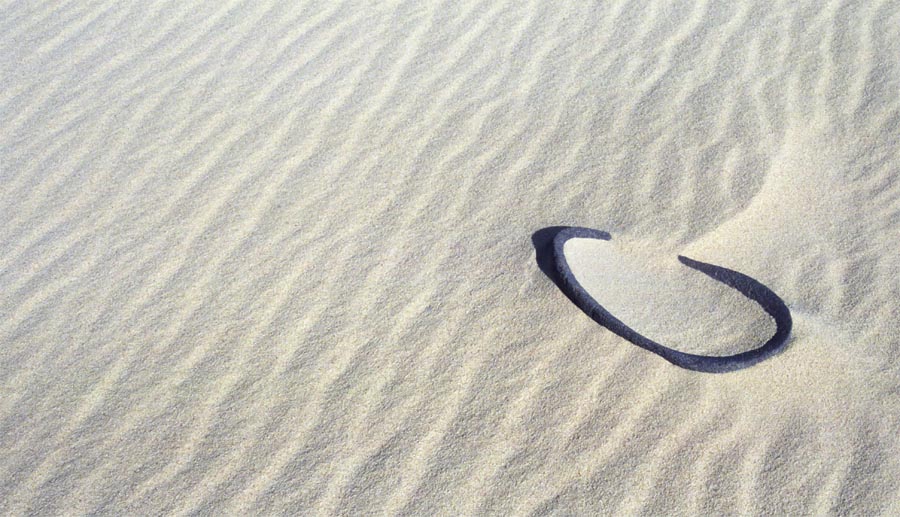 Another hint to the early industrial workmanship of meteorites is found in the statistics. The ratio of iron meteorites compared with the total number of falls is around 4 percent. As a matter of fact, in the Sahara only 0.2 percent of the meteorites are irons, the rest is missing. Until today, the enigmatic missing of the desert irons is an unsolved question. Provided that the pre islamic inhabitants of the Sahara, like their northern European contemporaries, collected and traded meteoritic iron as a raw material over longer periods, then one has an indication for the loss of these irons. For in the region of the Air Mountains, the first iron arrow- and harpoonpoints are documented as early as 2,400 B.C.. Thus there is a period of more than 4,000 years, in which the early nomads could have harvested and worked meteoritic iron.

Picking a spot for the night camp. Ténéré Tafassasset, Spring 2002 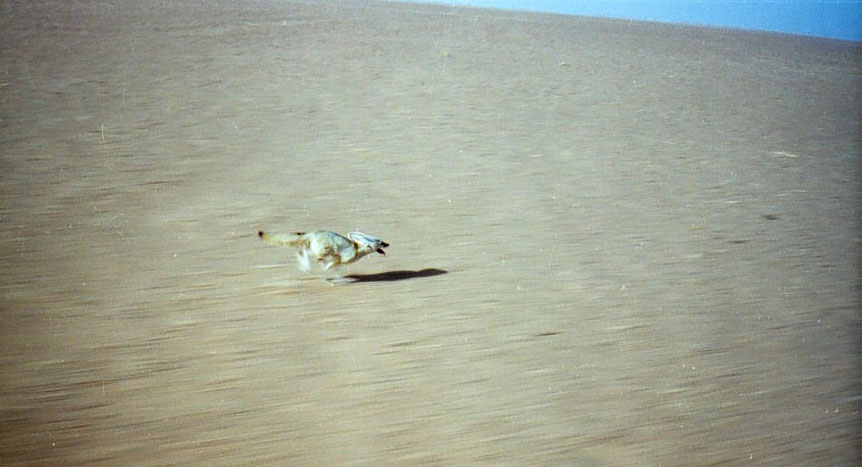 Fenek on the run

The next day, we end fieldwork west of the Air and prepare for the long journey into the central Ténéré. But before we cross the Air massif, we navigate towards Arlit to restock our supplies. Elkontchi, son of the Locust and a skilful driver in difficult terrain, knows the area we now pass from the days of the rebellion. He tells us about shallow artificial hills some 80 kilometers west of Arlit. We decide to change course and to visit the place. Soon, a pre-islamic burial ground comes in sight. More than forty grave mounds extend over an area of two by four kilometers. A few of them 9 meters tall with a diameter of almost 30 meters.

We can determine two periods. An older one with a rotund type grave mount and a younger with oval shaped mounds. Some of the larger constructions show marks of ancient tomb raiding. A couple of depressions close to the mounts can be interpreted as collapsed funnels. Single potsherds in the excavation point out that the activities in some cases were successful.

Lateron, we learn that the flat sandstone discs the burial hills are constructed with originate from a borrow source about 40 kilometers further south. It is evident that the ancient builders performed a logistic masterpiece with this site. A work that can not be imagined without the knowledge of the wheel.

From Herodotus, the Greek historian, we know that in pre islamic times only the legendary Garamants come into consideration as originators of such efforts. The reign of the Garamants, of whom Herodotus reports as “people of mammoth size who settled the oases of the Great Sand Sea”, began at around 1,000 B.C. Superior in technolgy and organization. the antecessors of todays Touareg pursued the Ethopian Troglodytes on chariots whenever they appeared in the open desert. It is very likely that the Troglodytes of whom Herodotus referst to as inhabitans of the Ennedi and Tibesti Mountains, were the last survivors of the aboriginal neolithic population of the Libyan deserts.